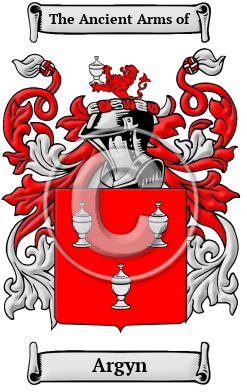 The name Argyn was brought to England by the Normans when they conquered the country in 1066. The ancestors of the Argyn family lived in Bedfordshire and Cambridgeshire in the south of England, where they held lands since the early Middle Ages. The family were "from the town and castle of Argenton, Berry, held in 1080 be Geoffroi, Sire d'Argenton, whose descendants continued there for twelve generations. David d'Argenton (perhaps his brother) held lands de capite in Cambridgeshire and Bedfordshire. [1] He is styled David de Argentomago or Argentomo; but the name gradually lapsed to Argentein or Argentine. His manor or Wymondley in Cambridgeshire was held by grand serjeanty, 'to serve the King on his coronation day with a silver cup'; and the English Argentines consequently substituted three covered cups to the torteauxes that had been borne by their ancestors in France." [2]

Early Origins of the Argyn family

The surname Argyn was first found in Bedfordshire and Cambridgeshire in the south of England. "The descendants of this Norman chieftain, David de Argentine, became feudal barons of great personal distinction. Reginald de Argentine, who appears to have been fifth in descent from the companion in arms of the Conqueror, succeeded all his father Giles de Argentine's vast estates, including the manor of Great Wymondeley, in Cambridgeshire. Of the same ancestry was Reginald de Argentine, who, in the 21 Henry III being a knight templar, was standard bearer of the Christian army in a great battle against the Turks, near Antioch, wherein he was slain." [3]

Early History of the Argyn family

This web page shows only a small excerpt of our Argyn research. Another 63 words (4 lines of text) covering the years 1507, 1625, 1649 and 1568 are included under the topic Early Argyn History in all our PDF Extended History products and printed products wherever possible.

It is only in the last few hundred years that the English language has been standardized. For that reason, Anglo-Norman surnames like Argyn are characterized by many spelling variations. Scribes and monks in the Middle Ages spelled names they sounded, so it is common to find several variations that refer to a single person. As the English language changed and incorporated elements of other European languages such as Norman French and Latin, even literate people regularly changed the spelling of their names. The variations of the name Argyn include Argent, Argentine, Argenton, Argente and others.

Outstanding amongst the family at this time was John Argentine (died 1507), an English physician who attended Edward V of England and later Arthur, Prince of Wales and was Provost of King's College, Cambridge; John Argent, who was a "Doctor of Physic,&quot...
Another 41 words (3 lines of text) are included under the topic Early Argyn Notables in all our PDF Extended History products and printed products wherever possible.

Migration of the Argyn family

Faced with the chaos present in England at that time, many English families looked towards the open frontiers of the New World with its opportunities to escape oppression and starvation. People migrated to North America, as well as Australia and Ireland in droves, paying exorbitant rates for passages in cramped, unsafe ships. Many of the settlers did not make the long passage alive, but those who did see the shores of North America were welcomed with great opportunity. Many of the families that came from England went on to make essential contributions to the emerging nations of Canada and the United States. Some of the first immigrants to cross the Atlantic and come to North America carried the name Argyn, or a variant listed above: William Argent, who settled in Charles Town [Charleston], South Carolina in 1672; Sarah Argent, who settled in Maryland in 1678; George Argent, who settled in North Carolina in 1736.