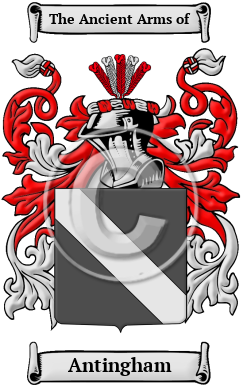 Early Origins of the Antingham family

The surname Antingham was first found in Norfolk where they held a family seat in the village of Antingham in that shire. The village is so named from the River Ant which has as its source Antingham Common. Prior to the Norman Conquest, in Saxon times, the village was named Attinga, Antigeham, and later Antingham. [2] At the time of the taking of the Domesday Book by William the Conqueror in 1086 the Manor of Antingham was held by Turstin FitzGuy, under tenant, from Chief tenant Roger Bigod, originally of Chanon Maletot, near Caen in Normandy, whose successors Hugh, and Roger Bigod his son, Earl of Norfolk, would be two of the 25 Barons who signed the Magna Charta in 1215. Robert Bigot, father of Roger, chief tenant, married the sister of Turstin Goz in Normandy, and the similarity of the two names cannot escape attention. Roger Bigod married Adeliza Grantemesnil and had seven children. He died in 1107 and is buried in Thetford Abbey in Norfolk. There is no record of Thurston FitzGuy being at the Conquest, nor did the name FitzGuy survive as a viable family name. It was customary, when the Normans introduced surnames into England in 1066, that the junior sons of the Baron would adopt the surname of the location where they held a family seat, so as to distinguish son from father. Turstin FitzGuy was under-tenant and seated at Antingham Manor. Conjecturally, the Antingham family surname is descended from this Norman noble, Turstin FitzGuy, who may have been the grandson, nephew or natural son of Roger Bigod, favorite of Duke William, who sired the Dukes of Norfolk.

Early History of the Antingham family

This web page shows only a small excerpt of our Antingham research. Another 78 words (6 lines of text) covering the years 1414 and 1468 are included under the topic Early Antingham History in all our PDF Extended History products and printed products wherever possible.

Multitudes of spelling variations are a hallmark of Anglo Norman names. Most of these names evolved in the 11th and 12th century, in the time after the Normans introduced their own Norman French language into a country where Old and Middle English had no spelling rules and the languages of the court were French and Latin. To make matters worse, medieval scribes spelled words according to sound, so names frequently appeared differently in the various documents in which they were recorded. The name was spelled Antingham, Antlingham, Attingham, Antringham, Anthingham, Antygham and many more.

More information is included under the topic Early Antingham Notables in all our PDF Extended History products and printed products wherever possible.

Antingham migration to the United States +

Because of this political and religious unrest within English society, many people decided to immigrate to the colonies. Families left for Ireland, North America, and Australia in enormous numbers, traveling at high cost in extremely inhospitable conditions. The New World in particular was a desirable destination, but the long voyage caused many to arrive sick and starving. Those who made it, though, were welcomed by opportunities far greater than they had known at home in England. Many of these families went on to make important contributions to the emerging nations of Canada and the United States. Analysis of immigration records indicates that some of the first North American immigrants bore the name Antingham or a variant listed above:

Antingham Settlers in United States in the 19th Century