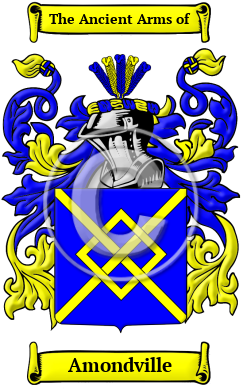 Amondville is an ancient Norman name that arrived in England after the Norman Conquest of 1066. The Amondville family lived in Amondeville, near Caen. [1]

Early Origins of the Amondville family

The surname Amondville was first found in Lincolnshire where conjecturally, the surname is descended from the tenant of the lands of Kingerby, Auresby, Ellesham, and Croxton held by Roger de Amondeville from Caen in Normandy. [2]

"In Lincolnshire, for some unaccountable reason, the head of the family always bore the mysterious alias of Humfines. The first who came to England, Roger de Amondeville, "called also Humfines," was Seneschal to Remigius, Bishop of Lincoln (one of the compilers of Domesday), and by him endowed with four Lincolnshire manors, Kingerby, the principal seat of his successors, Auresby, Ellesham, and Croxton. He married a daughter of Sir Gerard Salvin, of Thorpe-Salvin in Yorkshire, and left, besides Jolland, his heir, John, and Robert. " [1]

Later some of the family branched to "the Yorkshire manor of Carlton. The Amondevilles had already an estate in that county; for Whitaker tells us that they were probably the first grantees of Preston-in-Craven under Robert de Poitou." [1]

"The name had not died out, either in Yorkshire or Lincolnshire; though the objectionable form of Humfines occurs no more; for Walter de Amundeville was for seven years Viscount of Lincoln in the early part of Henry III.'s reign; and Whitaker speaks of a Nigel de Amundeville who succeeded Elias in Craven, and was most likely his younger son. Ralph de Amundeville, before 1340, was one of the principal benefactors of Swine Priory, on condition the convent would receive his daughter as a nun." (Clevalend1)

Another branch existed in Warwickshire and Northamptonshire. Henry de Newburgh, the first Norman Earl of Warwick, enfeoffed Ralph de Amundeville at Lighthorne and Berkeswell, where he was seated in the time of Henry I. In 1122 he witnessed his suzerain's foundation charter of the collegiate church of Warwick.

Early History of the Amondville family

This web page shows only a small excerpt of our Amondville research. Another 115 words (8 lines of text) covering the years 1510, 1600, 1179, 1256 and 1262 are included under the topic Early Amondville History in all our PDF Extended History products and printed products wherever possible.

Norman surnames are characterized by a multitude of spelling variations. The frequent changes in surnames are largely due to the fact that the Old and Middle English languages lacked definite spelling rules. The introduction of Norman French to England, as well as the official court languages of Latin and French, also had pronounced influences on the spelling of surnames. Since medieval scribes and church officials recorded names as they sounded, rather than adhering to any specific spelling rules, it was common to find the same individual referred to with different spellings. The name has been spelled Amondville, Amondvile, Amundvile, Amundville and others.

Outstanding amongst the family at this time was Richard Amundeville who in 1256 attended the Earl of Cornwall to Germany; and in 1262, was in the Welsh expedition under Prince Edward. In "Whether he did cordially adhere to the rebellious Barons shortly after, I will not take upon me to say; though plain it is that he was in Kenilworth Castle when the Royal army besieged it, and being reputed one of the Baron's partie, had safe conduct with Henry de Hastings and others, to march out upon the render thereof: yet so far...
Another 94 words (7 lines of text) are included under the topic Early Amondville Notables in all our PDF Extended History products and printed products wherever possible.

Migration of the Amondville family

Many English families emigrated to North American colonies in order to escape the political chaos in Britain at this time. Unfortunately, many English families made the trip to the New World under extremely harsh conditions. Overcrowding on the ships caused the majority of the immigrants to arrive diseased, famished, and destitute from the long journey across the stormy Atlantic. Despite these hardships, many of the families prospered and went on to make invaluable contributions to the development of the cultures of the United States and Canada. Early North American immigration records have revealed a number of people bearing the name Amondville or a variant listed above: George Ammond, who was naturalized in Pennsylvania in 1744.