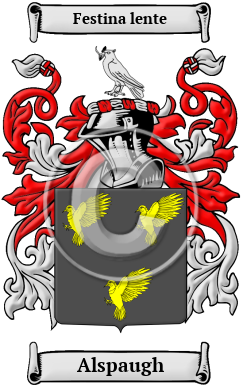 The name Alspaugh is part of the ancient legacy of the Anglo-Saxon tribes of Britain. It is a product of when the family lived in Alsop-le-Dale, a chapelry in the parish of Ashbourne, in the county of Derbyshire. "Alsop is the Elleshope of the Domesday Survey. The manor was given by the crown to William de Ferrars, Earl of Derby, from whom it passed in succession to various families. " [1]

"This ancient race were seated at Alsop-in-the-Dale, (Alsop-Le-Dale) in Derbyshire, about the time of the Conquest, and there continued in an uninterrupted descent for 19 or 20 generations." [2]

Early Origins of the Alspaugh family

The surname Alspaugh was first found in Derbyshire in the midland of England where the Pipe Rolls of 1175 include and entry for Gamel de Haleshoppe. Later, Philip Alsope was listed in the Hundredorum Rolls of 1273 in Cheshire. [3]

"The ancient and distinguished family of Alsop were seated at Alsop-in-the-Dale, in the parish of Ashbourn, at the time of the Norman Conquest, and there they continued for 19 or 20 generations. Of this family there are numerous branches, of which the Allsopps of Burton form one. There was a Richard de Alsop of Shropshire in the 13th century. The name is also found in the surrounding counties, but Derbyshire is its great home." [5]

In Scotland, "this surname occurs in the Aberdeen Directory, and is most probably of recent introduction from England. From Alsop in the county of Derby." [6]

Early History of the Alspaugh family

This web page shows only a small excerpt of our Alspaugh research. Another 47 words (3 lines of text) covering the years 1752, 1630, 1703, 1726, 1696, 1706 and 1703 are included under the topic Early Alspaugh History in all our PDF Extended History products and printed products wherever possible.

The first dictionaries that appeared in the last few hundred years did much to standardize the English language. Before that time, spelling variations in names were a common occurrence. The language was changing, incorporating pieces of other languages, and the spelling of names changed with it. Alspaugh has been spelled many different ways, including Allsopp, Allsop, Alsopp, Alsop, Elleshope and others.

Notables of this surname at this time include: Vincent Alsop (ca. 1630-1703), an English Nonconformist clergyman. Anthony Alsop (d. 1726), was an English poetical writer, educated at Westminster and Christ Church...
Another 31 words (2 lines of text) are included under the topic Early Alspaugh Notables in all our PDF Extended History products and printed products wherever possible.

Migration of the Alspaugh family

Thousands of English families in this era began to emigrate the New World in search of land and freedom from religious and political persecution. Although the passage was expensive and the ships were dark, crowded, and unsafe, those who made the voyage safely were rewarded with opportunities unavailable to them in their homeland. Research into passenger and immigration lists has revealed some of the very first Alspaughs to arrive in North America: Joseph Alsop who settled in New Haven in 1635; in 1647 he married Elizabeth Preston; John Alsop settled in Pennsylvania in 1682; Richard Alsopp arrived in Barbados in 1680.