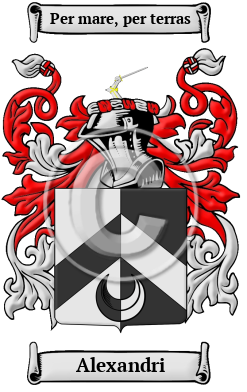 This name comes from the given name Alexander, which was in turn originally derived from the Greek name, which means defender of men. In the late 11th century, Queen Margaret introduced the name into Scotland by naming one of her sons Alexander; she had heard the name in the Hungarian Court where she was raised. From Scotland, the name came to Ireland, where MacAlasandair became the Irish form.

Early Origins of the Alexandri family

The surname Alexandri was first found in Kintyre, where they held a family seat from ancient times.

Early History of the Alexandri family

Another 30 words (2 lines of text) are included under the topic Early Alexandri Notables in all our PDF Extended History products and printed products wherever possible.

Migration of the Alexandri family to Ireland

Some of the Alexandri family moved to Ireland, but this topic is not covered in this excerpt.
Another 81 words (6 lines of text) about their life in Ireland is included in all our PDF Extended History products and printed products wherever possible.

Migration of the Alexandri family

Some of the first settlers of this family name or some of its variants were: Sir William Alexander, Earl of Stirling, who colonized Nova Scotia, in Antigonish, Pictou, the Carolinas, Virginia and Upper Canada. Richard H. Alexander, traveled from Ontario in a group called the &quot.