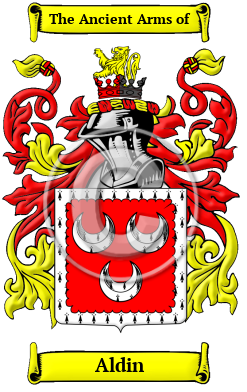 Early Origins of the Aldin family

The surname Aldin was first found in Westmorland where they held a family seat as Lords of the Manor. The Saxon influence of English history diminished after the Battle of Hastings in 1066. The language of the courts was French for the next three centuries and the Norman ambience prevailed. But Saxon surnames survived and the family name was first referenced in the 11th century when Aldenus held estates in that county. They may have been of Cumbrian extraction. The Dalden variant has a most interesting history found in Dawdon or Dawden, Durham. "There was once a castle or peel here, which in the first ages after the Conquest was the seat of the family of Escolland, who, it seems, afterwards assumed the name of Dalden, by which term this place was formerly designated, It was also for two centuries a favourite seat of the family of Bowes. A domestic chapel was attached to the structure, as Sir Jordan de Dalden, in 1325, obtained a licence to establish an oratory within his manor-house, on condition that no injury should arise to the parochial church of Dalton." [1]

Early History of the Aldin family

The English language only became standardized in the last few centuries; therefore, spelling variations are common among early Anglo-Saxon names. As the form of the English language changed, even the spelling of literate people's names evolved. Aldin has been recorded under many different variations, including Alden, Aldin, Aldwen, Aldyn, Aldwyn, Aldwen, Elden, Eldwyn, Eldwin, Eldin, Olden, Auden, Aldan, Aldon and many more.

Distinguished members of the family include John, C. Alden (1599-1687) was a crew member of the Mayflower and one of the Puritan settlers of the Plymouth Colony. He arrived in America where he became an assistant to the Governor of the colony. He married Priscilla Alden (c. 1602-1680) (née Mullins or Mullens), on May 12, 1622. She was another passenger on...
Another 60 words (4 lines of text) are included under the topic Early Aldin Notables in all our PDF Extended History products and printed products wherever possible.

Aldin migration to the United States +

For many English families, the political and religious disarray that shrouded England made the far away New World an attractive prospect. On cramped disease-ridden ships, thousands migrated to those British colonies that would eventually become Canada and the United States. Those hardy settlers that survived the journey often went on to make important contributions to the emerging nations in which they landed. Analysis of immigration records indicates that some of the first North American immigrants bore the name Aldin or a variant listed above:

Aldin Settlers in United States in the 17th Century