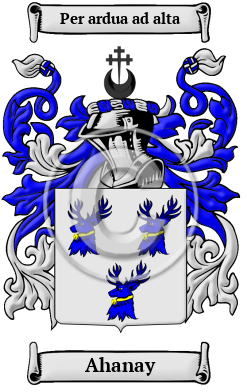 The chronicles of the Ahanay family indicate that the name was first used by the Strathclyde Britons of the Scottish/English Borderlands. It is derived from the personal names Hannah and Anna. Another possibility is that it is a religious name, taken from that of Hannah, mother of Samuel. Most likely, however, given the family's Gaelic origins is that it was an anglicized version of the Gaelic "O hAnnaigh", meaning "descendant of Annach", a byname meaning "iniquity". [1]

Early Origins of the Ahanay family

The surname Ahanay was first found in Wigtownshire (Gaelic: Siorrachd Bhaile na h-Uige), formerly a county in southwestern Scotland, now part of the Council Area of Dumfries and Galloway, where in 1296, Gilbert de Hannethe residing in the county of Wiggetone at the time, rendered homage to King Edward I of England during his brief conquest of Scotland.

During the same year, a Gilbert Hahanith, who may or may not be the same man, was juror on an inquest concerning the succession to Elena la Zuche. The next appearance of the name is in 1424 when John of Hanna (a name that suggests that the name may have been taken from a place, rather than of Gaelic origin) was master of a ship belonging to James, King of Scotland. [1]

Further to the south in England, Hannay or Hannah is a small parish, in the union of Louth, Wold division of the hundred of Calceworth, parts of Lindsey in Lincolnshire. [2]

And East and West Hanney are in the union of Wantage, partly in the hundred of Ock, but chiefly in that of Wantage, in Berkshire. Both were traditionally in Oxfordshire. These parishes collectively date back to Saxon times when they were known as Hannige c. 956. There were listed in the Domesday Book of 1086, as Hannei and literally meant "island or land between streams, frequented by wild birds." [3]

Early History of the Ahanay family

This web page shows only a small excerpt of our Ahanay research. Another 109 words (8 lines of text) covering the years 1673, 1658, 1689, 1630, 1629, 1620 and are included under the topic Early Ahanay History in all our PDF Extended History products and printed products wherever possible.

It is only in the last few hundred years that rules have developed and the process of spelling according to sound has been abandoned. Scottish names from before that time tend to appear under many different spelling variations. Ahanay has been spelled Hannah, Hanna, Hannay, Hanney and others.

Notable amongst the family at this time was Gilbert Hannah of Wigtown; Sir Robert Hannay, 1st Baronet (d. 1658) of Mochrum in the Stewardry of Kirkcudbright; Sir Robert Hannay, 2nd Baronet (d. 1689); and Patrick Hannay (died 1630?) was a Scottish poet and courtier from the stewartry of Kirkcudbright. He "was probably the third son of Alexander Hannay of Kirkdale in the stewartry of Kirkcudbright. His grandfather...
Another 66 words (5 lines of text) are included under the topic Early Ahanay Notables in all our PDF Extended History products and printed products wherever possible.

Migration of the Ahanay family to Ireland

Some of the Ahanay family moved to Ireland, but this topic is not covered in this excerpt.
Another 87 words (6 lines of text) about their life in Ireland is included in all our PDF Extended History products and printed products wherever possible.

Migration of the Ahanay family

Unwelcome in their beloved homeland, many Scots sailed for the colonies of North America. There, they found land and freedom, and even the opportunity to make a new nation in the American War of Independence. These Scottish settlers played essential roles in the founding of the United States, and the shaping of contemporary North America. Among them: Alexander Hannah settled in Boston in 1766; Andrew Hannah settled in Antigua in 1679; George Hannah settled in Barbados in 1680 with his wife and two children.