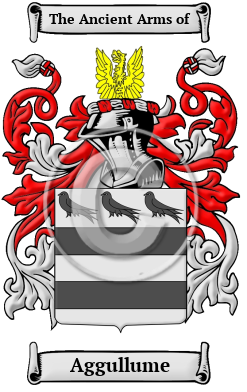 Aggullume is a name that first reached England following the Norman Conquest of 1066. The Aggullume family lived in Cumberland.

Early Origins of the Aggullume family

The surname Aggullume was first found in Cumberland where they were Lords of the Manor of Aglionby from very ancient times. They were descended from Ranulph, Earl of Carlisle, Lord of Cumberland and Carlisle, who exchanged the earldom of Chester for that of Carlisle. The Earls of Chester were previously viscounts of Bessin in the department of Calvados in Normandy. The first in Cumberland about 1150 was Walter de Aguilon.

The township of Linstock in Cumberland was home to the family in later years. "A little north-eastward of Linstock is Drawdykes Castle, originally erected with the materials of the Roman wall, which crossed its site, and partially rebuilt in the seventeenth century, by John Aglionby, Esq., recorder of Carlisle, who placed on the battlements three Roman stone busts, which yet remain: this ancient seat is now a farmhouse." [1]

Early History of the Aggullume family

The English language only became standardized in the last few centuries. For that reason, spelling variations are common among many Anglo-Norman names. The shape of the English language was frequently changed with the introduction of elements of Norman French, Latin, and other European languages; even the spelling of literate people's names were subsequently modified. Aggullume has been recorded under many different variations, including Aglionby, Agglionby, Acclionby, Aclionby and others.

Outstanding amongst the family at this time was Edward Aglionby (1520-ca. 1587), English poet, educated at Eton, and elected to King's College, Cambridge, 1536, Justice of the Peace in Warwickshire, and wrote a genealogy of Queen Elizabeth and was "born at Carlisle in 1520, and educated at Eton, from whence he was elected in...
Another 54 words (4 lines of text) are included under the topic Early Aggullume Notables in all our PDF Extended History products and printed products wherever possible.

Migration of the Aggullume family

To escape the uncertainty of the political and religious uncertainty found in England, many English families boarded ships at great expense to sail for the colonies held by Britain. The passages were expensive, though, and the boats were unsafe, overcrowded, and ridden with disease. Those who were hardy and lucky enough to make the passage intact were rewarded with land, opportunity, and social environment less prone to religious and political persecution. Many of these families went on to be important contributors to the young nations of Canada and the United States where they settled. Aggullumes were some of the first of the immigrants to arrive in North America: Will Aglionby settled in Georgia, no date was recorded.