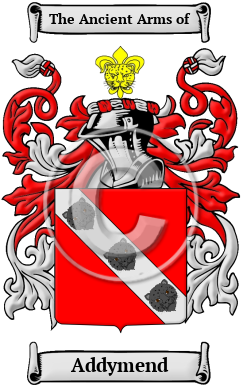 Early Origins of the Addymend family

The surname Addymend was first found in the county of Berwickshire, Scotland, where "Ade Rede, William Ade of Inverkeithin rendered homage [to King Edward I] in 1296." [1]

Early History of the Addymend family

During the era when a person's name, tribe and posterity was one of his most important possessions, many different spellings were found in the archives examined. Addymend occurred in many references, and spelling variations of the name found included Ade, Addie, Addy, Addey, Eadie, Eddie, Edie, Edey, Aidie, Aidy, Aiddye, Adie and many more.

Notable amongst the family name during their early history was William Ade; and John Etty of York (c. 1634-1708), an English architect and craftsman; and his son, William Etty (c. 1675-1734), an English architect and craftsman, best known for designing Holy Trinity Church, Leeds and probably Holy Trinity Church, Sunderland. William Addy (fl. 1685) was a writing-master based in London, and the author of a system of shorthand published in 1685. Many Addies made important contributions in Scottish and northern English life. For more details see Zetland Family Histories by F. I. Grant, and the Adies of Smiddiegreen by W. MacFarlane. John Attey...
Another 123 words (9 lines of text) are included under the topic Early Addymend Notables in all our PDF Extended History products and printed products wherever possible.

Migration of the Addymend family to Ireland

Some of the Addymend family moved to Ireland, but this topic is not covered in this excerpt.
Another 48 words (3 lines of text) about their life in Ireland is included in all our PDF Extended History products and printed products wherever possible.

Migration of the Addymend family

Gradually becoming disenchanted with life in Ireland many of these uprooted families sailed aboard the armada of sailing ships known as the "White Sails" which plied the stormy Atlantic. These overcrowded ships often arrived with only 60 to 70% of their original passenger list, many dying of illness and the elements, were buried at sea. In North America, early immigrants bearing the family name Addymend, or a spelling variation of the surname include: William Addy who was fined in Plymouth, Massachusetts in 1635 for working on a Sunday; John Ade, his wife, two sons and two daughters, settled in America in 1709.