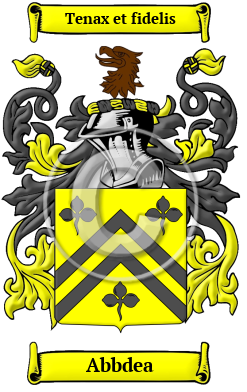 The ancient roots of the Abbdea family name are in the Anglo-Saxon culture. The name Abbdea comes from when the family lived in or near an abbey. More specifically, the surname Abbdea was originally derived from the settlement of Abdy, a family estate in Yorkshire. The surname also has an occupational origin, and signifies one who was employed at an abbey.

Early Origins of the Abbdea family

The surname Abbdea was first found in Yorkshire, where Robert and Johannes del Abdy were registered in the Yorkshire Poll Tax Rolls of 1379. [1] Further north, Abdie is a parish, in the district of Cupar, Fifeshire. [2] "The parish, anciently called Lindores, was formerly of much greater extent than at present, including the lands of the parish of Newburgh." [3] Stapleford Abbot's in Essex was home to another branch of the family. "The fine old mansion of Albyns, the residence of the Abdy family, built by Inigo Jones, is situated here. In the church are also monuments to the family of Abdy; to John, Lord Fortescue, one of the justices of the court of common pleas; and his son Dormer, the last lord." [4]

Early History of the Abbdea family

One relatively recent invention that did much to standardize English spelling was the printing press. However, before its invention even the most literate people recorded their names according to sound rather than spelling. The spelling variations under which the name Abbdea has appeared include Abdy, Abdie, Abde, Abdey, Abdee, Abdye, Abbdy, Abbdey and many more.

Migration of the Abbdea family

At this time, the shores of the New World beckoned many English families that felt that the social climate in England was oppressive and lacked opportunity for change. Thousands left England at great expense in ships that were overcrowded and full of disease. A great portion of these settlers never survived the journey and even a greater number arrived sick, starving, and without a penny. The survivors, however, were often greeted with greater opportunity than they could have experienced back home. These English settlers made significant contributions to those colonies that would eventually become the United States and Canada. An examination of early immigration records and passenger ship lists revealed that people bearing the name Abbdea arrived in North America very early: Mathew Abdy, who sailed to Virginia in 1635; Nicholas Abdey to Virginia in 1637; Roger Abdy to America in 1640; and John Abdee to Maryland in 1670. Samuel and George Abdy were living in Bruce County, Ontario in 1867..