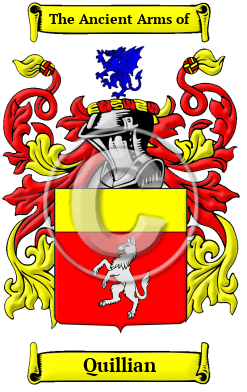 The surname Quillian is derived from the personal name Hugelin, which is a diminutive of Hugh. The Gaelic form of the name is Mac Uighilin.

Early Origins of the Quillian family

The surname Quillian was first found in County Antrim (Irish: Aontroim) located in the province of Ulster in present day Northern Ireland, where they were granted lands by Strongbow after the Anglo/ Norman invasion of Ireland in 1172.

Specifically, "The MacQuillans were lords of the territory of the Routes, in co. Antrim, holding their chief residence in the fine old sea-girt castle of Dunluce." MacLysaght agrees "The MacQillans are of Norman- Welsh descent: they settled soon after the invasion in the territory called the Route (co. Antrim.)" [1]

One of the first records of the family was Malcolm MacQuillan who died in 1307. Little is known of his heritage, but what we do know is that he was granted safe conduct by the English so he could assail Scottish forces, on Scotland's western seaboard, with his galley fleet. He was part of a fleet of eighteen galleys with 1,000 men who landed near Stranraer, now a town in southwest Scotland in Inch, Dumfries and Galloway. But, this force was quickly overwhelmed by local forces led by Dungal MacDouall. MacQuillan was captured and executed. His head and the heads from two Irish chiefs were sent back to King Edward I.

Early History of the Quillian family

Notable amongst the family up to this time was Malcolm MacQuillan (died 1307) Irish nobleman who was granted safe conduct by the English so he could assail Scottish forces, on Scotland's western seaboard, with his galley fleet in July 1300. However, the invasion force was quickly overwhelmed by local forces. Malcolm was captured and summarily executed with the Irish sub king. The heads of McQuillan and two Irish chiefs were sent to King Edward I. In 1485, Rory MacQuillan founded a late Franciscan foundation named Bonamargy Friary situated in County Antrim...
Another 89 words (6 lines of text) are included under the topic Early Quillian Notables in all our PDF Extended History products and printed products wherever possible.

Quillian migration to the United States +

The Irish emigration during the late 18th and 19th century contributed to the melting pot of nationalities in North America, and the building of a whole new era of industry and commerce in what was seen as a rich, new land. Ireland's Great Potato Famine resulted in the worst economic and social conditions in the island's history. And in response to the hunger, disease, and poverty, during this decade the total number of emigrants to leave for North America rivaled all the previous years combined. Those from this decade that arrived on North American shores were not warmly welcomed by the established population, but they were vital to the rapid development of the industry, agriculture, and infrastructure of the infant nations of the United States and what would become Canada. Research into early immigration and passenger lists has shown many people bearing the name Quillian:

Quillian Settlers in United States in the 19th Century

Quillian Settlers in United States in the 20th Century