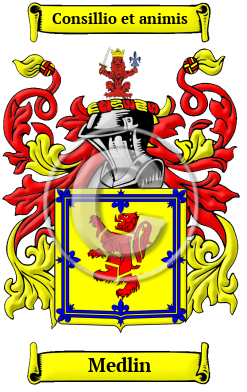 From the historical and enchanting region of Scotland emerged a multitude of noble families, including the distinguished Medlin family name. Originally, the Scottish people were known only by a single name. Surnames evolved during the Middle Ages when people began to assume an extra name to avoid confusion and to further identify themselves. The Medlin surname is generally thought to derive from the Anglo-Norman French word "maltalent," or "mautalent," meaning "bad temper," in turn from the Late Latin "malum," meaning "bad," and "talentum," meaning "inclination," or "disposition." As such, the surname is said to be a nickname surname; originally used for someone with this characteristic. However, there was also a place called Mautalant in Pontorson, France, which may have been a source for the surname.

Early Origins of the Medlin family

The surname Medlin was first found in Berwickshire an ancient county of Scotland, presently part of the Scottish Borders Council Area, located in the eastern part of the Borders Region of Scotland, where they came from England following 1066. Instances of the name were fairly common in Northumberland during the 12th and 13th centuries. One reference claims the name was thought to have been derived from a place in the parish of Inveresk in the county of Edinburgh called Magdalen Pans, which evolved to Maitland Pans, from a chapel dedicated to St. Mary Magdalen, which formerly stood there.[1] Whatever the origin, it seems the first on record in Scotland was Thomas de Matalant, who was settled in Berwick during the reign of William the Lion, King of Scots from 1165 to 1214.

Early History of the Medlin family

Notable among the family at this time was Sir Richard Maitland (1486-1586), lawyer and poet; John Maitland (1537-1595), created 1st Lord Maitland of Thirlestane (1590), and Lord Chancellor of Scotland (1586); John Maitland, 1st Earl of Lauderdale, Viscount of Lauderdale, Viscount Maitland, and Lord Thirlestane and Boltoun, (died 1645), President of the Scottish Parliament; and...
Another 55 words (4 lines of text) are included under the topic Early Medlin Notables in all our PDF Extended History products and printed products wherever possible.

Migration of the Medlin family to Ireland

Some of the Medlin family moved to Ireland, but this topic is not covered in this excerpt.
Another 51 words (4 lines of text) about their life in Ireland is included in all our PDF Extended History products and printed products wherever possible.

Medlin migration to the United States +

Medlin Settlers in United States in the 19th Century

Medlin Settlers in United States in the 20th Century

Medlin Settlers in Australia in the 19th Century

Medlin Settlers in New Zealand in the 19th Century