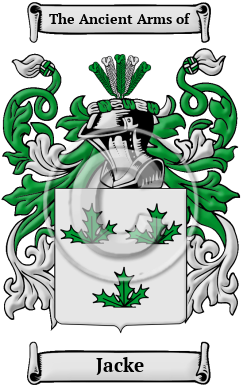 The Scottish surname Jacke is generally understood to be derived from the given name John, which in turn came from the French name "Jacques," one of the many names that the Normans brought with them when they conquered England and Scotland. "Jacques," is a form of the Latin name "Jacobus." [1]

Early Origins of the Jacke family

The surname Jacke was first found in Renfrewshire (Gaelic: Siorrachd Rinn Friù), a historic county of Scotland, today encompassing the Council Areas of Renfrew, East Renfrewshire, and Iverclyde, in the Strathclyde region of southwestern Scotland, where they held a family seat at Woodall between Langbank and the Port of Glasgow from ancient times.

Early History of the Jacke family

Notable amongst the family at this time was Wilyem Jaik, Deacon of the Kirk of Aberdeen in 1580. Thomas Jack (d. 1598), was a Scottish schoolmaster, appointed minister of Rutherglen in the presbytery of Glasgow, in 1567, and subsequently became master of Glasgow grammar school. In 1570 he was presented by James VI to the vicarage of Eastwood in the presbytery of...
Another 60 words (4 lines of text) are included under the topic Early Jacke Notables in all our PDF Extended History products and printed products wherever possible.

Migration of the Jacke family to Ireland

Some of the Jacke family moved to Ireland, but this topic is not covered in this excerpt.
Another 59 words (4 lines of text) about their life in Ireland is included in all our PDF Extended History products and printed products wherever possible.

Jacke migration to the United States +

Jacke Settlers in United States in the 18th Century

Jacke Settlers in United States in the 19th Century