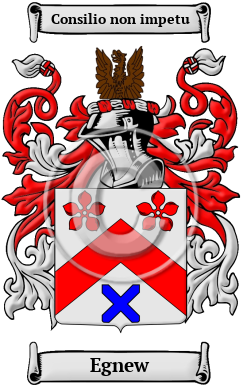 Early Origins of the Egnew family

The surname Egnew was first found in the Barony of Agneaux, within Normandy, where "a Marquis d'Agneaux still owns portions of the ancestral fiefs and the Chateau d'Agneaux still overlooks the valley of the Vire. In 1363 the Lochnaw family of the name were appointed hereditary sheriffs of Galloway (Gaelic: Gall-ghaidhealaibh) by King David a and they gradually became great land-owners in the province, holding many estates." [1]

Some have mistakenly considered the Agnews to be of Irish origin, as an Anglicized form of the Irish sept O'Gnivews, but the name is actually of territorial origin, deriving from Agneaux. They are descended from John McDonnell, brother of Angus Oge, Lord of the Isles, his grandson being John MacGneive, who was called in English, Agnew.

Early History of the Egnew family

Migration of the Egnew family to Ireland

Some of the Egnew family moved to Ireland, but this topic is not covered in this excerpt.
Another 74 words (5 lines of text) about their life in Ireland is included in all our PDF Extended History products and printed products wherever possible.

Egnew migration to the United States +

Egnew Settlers in United States in the 18th Century

Egnew Settlers in United States in the 19th Century

Historic Events for the Egnew family +