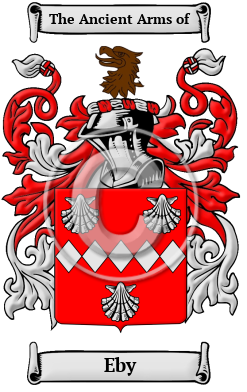 Eby is a name that evolved among the descendants of the people of the kingdom of Dalriada in ancient Scotland. It is a name for a person who worked as a person who was a lay-abbot of a monastery. In the Middle Ages, this was the title held usually by the leading family of the village. [1]

Early Origins of the Eby family

The surname Eby was first found in the county of Angus, in the parish of Abbey and Brechin. The first record was of Douenaldus (Donald) Abbe of Brechin in 1178, who witnessed a charter with Turpin, Bishop of Brechin, and later he gifted the lands of Balegillegrand to the Abbey of Arbroath, which grant was confirmed by King William the Lion. "Maurice Abbe of Abireloth or Abereloth appears as witness in charters by Gilchrist, earl of Angus and of John de Mountfort between 1201 and 1214. Between 1211 and 1214 Johannes Abbe with the advice and consent of his son Morgund granted to the monks of Abirebroth (Arbroath) permission to take charcoal from 'nemore jaeo de Edale,' now Edzell. The same John Abbe and Morgund his son were present at the perambulation of the boundaries of the lands of the Abbey of Arbroath and the barony of Kynblathmond in 1219. Nicholas Abbe appears as juror on an Inquest in 1250, Simon del Abbeye, Scottish merchant, complained in 1370 of being plundered by English wreckers." [2]

As one would expect the name was scattered throughout ancient England. Ralph le Abbe was found in Devon as was William del Abbay. In Lancashire, Robert del Abbay was listed there in 1332. [3]

William filius Abi was recorded in Buckinghamshire, 1273. Willelmus Abson of Yorkshire, was listed in the Yorkshire Poll Tax of 1379. [3] John Abbys was documented in County Norfolk in the year 1480. [4]

Early History of the Eby family

This web page shows only a small excerpt of our Eby research. Another 69 words (5 lines of text) covering the years 1219 and 1370 are included under the topic Early Eby History in all our PDF Extended History products and printed products wherever possible.

Spelling and translation were not standardized practices until the last few centuries. Spelling variations are extremely common among early Scottish names. Eby has been spelled Abbey, Aba, Abbe, Abbie, Abey, Abbeys, Aby and others.

More information is included under the topic Early Eby Notables in all our PDF Extended History products and printed products wherever possible.

Eby migration to the United States +

Scottish settlers arrived in many of the communities that became the backbones of the United States and Canada. Many stayed, but some headed west for the endless open country of the prairies. In the American War of Independence, many Scots who remained loyal to England re-settled in Canada as United Empire Loyalists. Scots across North America were able to recover much of their lost heritage in the 20th century as Clan societies and highland games sprang up across North America. Early immigration and passenger lists have documented some of the first Ebys to arrive on North American shores:

Eby Settlers in United States in the 19th Century

Eby Settlers in Canada in the 19th Century