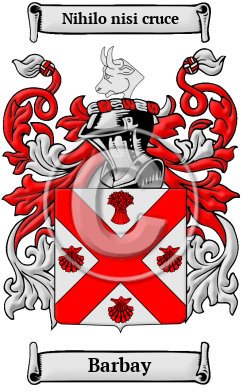 The chronicles of Scottish history reveal that the first people to use the name Barbay were the Strathclyde-Britons. The Barbay surname is derived from the Anglo-Norman French word "barbier," in turn from the Late Latin "barbarius," or "barba, " meaning "beard." As such, the medieval barber who not only cut hair and gave shaves, but also practiced surgery and pulled teeth. [1]

Early Origins of the Barbay family

The surname Barbay was first found in Northumberland, and Cumberland. Some of the first records of the family were Gilbert le Barber or Barbour and Michael le Barber who were Scots prisoners taken at Dunbar Castle in 1296. [1]

The year 1296 is important to note as this was the year that King Edward I of England invaded Scotland. Those on the borders were deeply affected and those who refused to pay homage to the king were often thrown in jail.

However not all of the family failed to pay homage, as Aleyn le Barbur of the county of Arne did render homage to the invading king. Later in 1305, John Barbitonsor rendered the accounts for the farm of Mountros and a few years later, William Barbitonsor had confirmation of a charter of lands in 1317.

The famed Robert Bruce granted to Ade Barbitonsor a toft in Moffat with two bovates of land adjoining (presumably the same year) and in 1328 there is entry of a payment to Andrew Barber. [1]

John Barbour (1316?-1395), was the earliest Scottish poet on record and one of the best of the ancient Scottish poets, a contemporary of Chaucer. He was also Archdeacon of Aberdeen. "The date of his birth is conjectural, but his death, on 13 March 1395, is proved by an entry in the obit book of the cathedral, the cessation in that year of a pension conferred on him by Robert II, and other documentary evidence. In 1357 he appears as Archdeacon of Aberdeen in a safe-conduct by Edward III to him and three scholars going to study at Oxford." [2]

Early History of the Barbay family

Prior to the first dictionaries, scribes spelled words according to sound. This, and the fact that Scottish names were repeatedly translated from Gaelic to English and back, contributed to the enormous number of spelling variations in Scottish names. Barbay has been spelled Barbour, Barber, Barberton and others.

Another 50 words (4 lines of text) are included under the topic Early Barbay Notables in all our PDF Extended History products and printed products wherever possible.

Migration of the Barbay family to Ireland

Some of the Barbay family moved to Ireland, but this topic is not covered in this excerpt.
Another 197 words (14 lines of text) about their life in Ireland is included in all our PDF Extended History products and printed products wherever possible.

Migration of the Barbay family

In such difficult times, the difficulties of raising the money to cross the Atlantic to North America did not seem so large compared to the problems of keeping a family together in Scotland. It was a journey well worth the cost, since it was rewarded with land and freedom the Scots could not find at home. The American War of Independence solidified that freedom, and many of those settlers went on to play important parts in the forging of a great nation. Among them: George Barber who arrived in Virginia in 1635, aboard the "Transport," and was later a freeman of Dedham, MA; Henry Barber, who came to Virginia in 1623.

Motto: Nihilo nisi cruce
Motto Translation: Nothing, but the cross.