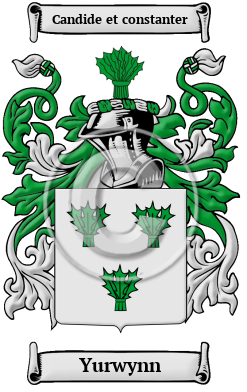 Yurwynn is an ancient Scottish name that was first used by the Strathclyde-Briton people of the Scottish/English Borderlands. It is a name for someone who lived in the parish of Irving in the county of Dumfriesshire or from Irvine in Strathclyde. There are a variety of possible origins of the name and we will explore some of them here. One source claims the name was a "descendant of Erewine (sea friend); or one who came from Irvine (green river), in Ayrshire. " [1]

Early Origins of the Yurwynn family

The surname Yurwynn was first found in Ayrshire, at Irvine, a parish, in the district of Cunninghame, about 26 miles (W. S. W.) from Glasgow. "[Irvine] derives its name from the river on which it is situated, and appears to have attained a high degree of importance at a very early period. The inhabitants obtained from Alexander II. a charter conferring upon the town all the privileges of a royal burgh; and a charter confirming all previous grants was subsequently given to them by Robert Bruce, in recompense of their services during his wars with England in the reign of Edward I." [4]

Early History of the Yurwynn family

In Medieval times, spelling and translation were not nearly so highly developed as today. They were generally carried out according to the sound and intuition of the bearer. For that reason spelling variations are extremely common among early Scottish names. Yurwynn has been spelled Irwin, Erwin, Irvine, Irving, Urwin, Erwine, Ervin, Erwing, Ervynn, Ervine, Erwynn, Irwing, Irwryn and many more.

Notable amongst the family at this time was Adam Irvine, Burgess of Irvine in 1455, doubtless derived his surname from Aberdeenshire. Sir Alexander Irvine of Drum (d. 1658), the Royalist, "was descended from William de Irvine, who was armour-bearer to Robert Bruce, and was rewarded for his devoted services by a grant of the forest of Drum, Aberdeenshire, at that time part of a royal forest. A grandson of William de Irvine (Sir Alexander) distinguished himself...
Another 76 words (5 lines of text) are included under the topic Early Yurwynn Notables in all our PDF Extended History products and printed products wherever possible.

Migration of the Yurwynn family to Ireland

Some of the Yurwynn family moved to Ireland, but this topic is not covered in this excerpt.
Another 144 words (10 lines of text) about their life in Ireland is included in all our PDF Extended History products and printed products wherever possible.

Migration of the Yurwynn family