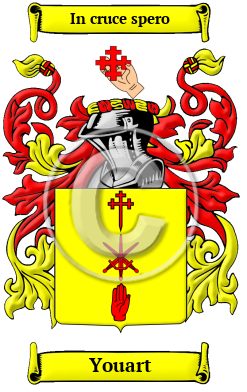 Early Origins of the Youart family

The surname Youart was first found in Durham where they were Barons of Witton-le-Wear in the county of Durham, where they had their castle, as well as Lords of Kirkley, in Northumberland ; and descended from Eustace Fitzjohn, one of the greatest barons in the reign of Henry I. by his second marriage with the heiress of the Constable of Chester. Their younger grandson, Roger, received the barony of Warkworth from Henry II., and was the father of Richard, who founded Langley Abbey in Norfolk. King Richard gave him Eure in Buckinghamshire, from which place his grandson Hugh, the ancestor of the Lords Evers, derived his name." [1]

Early History of the Youart family

Notable amongst the family name during their early history was Nigel Ewart, Chief of Bodisbeg in 1607. Joseph Ewart (1759-1792), was a Scottish-born diplomatist, eldest son of the minister of Troquear in the stewartry of Kirkcudbright and was born on 30 April 1759. He was educated at Dumfries and at Edinburgh University, and then acted as travelling tutor to Macdonald of Clanronald. While abroad, Ewart made the acquaintance of Sir...
Another 69 words (5 lines of text) are included under the topic Early Youart Notables in all our PDF Extended History products and printed products wherever possible.

Migration of the Youart family to Ireland

Some of the Youart family moved to Ireland, but this topic is not covered in this excerpt.
Another 58 words (4 lines of text) about their life in Ireland is included in all our PDF Extended History products and printed products wherever possible.

Youart migration to the United States +

Youart Settlers in United States in the 19th Century