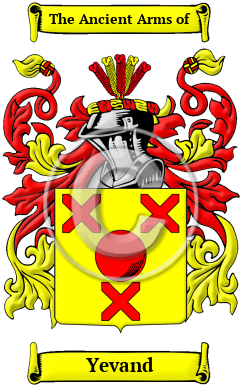 The Yevand surname comes from the Welsh personal name Evan. The original form of the name was Jevon, which then became Yevan and Ieuan before taking on its present form. Evan is a cognate of the personal name John.

Early Origins of the Yevand family

The surname Yevand was first found in Lincolnshire. Early feudal rolls provided the king of the time a method of cataloguing holdings for taxation, but today they provide a glimpse into the wide surname spellings over the years. Alexander le iouene was the first on record followed by John le Jofne who was listed in the Curia Regis Rolls for 1200. Over 50 years later, Bartholomew le Joevene, le Juvene was found in Bedfordshire (1254-1269.) But before that, Robert le Joefne, le Jevene was listed in the Feet of Fines for Northumberland (1242-1255.) [1]

Early History of the Yevand family

There are relatively few surnames native to Wales, but they have an inordinately large number of spelling variations. Early variations of Welsh surnames can be explained by the fact that very few people in the early Middle Ages were literate. Priests and the few other literate people were responsible for recording names in official documents. And because most people could not specific how to properly record their names it was up to the individual recorder of that time to determine how a spoken name should be recorded. Variations due to the imprecise or improper recording of a name continued later in history when names originally composed in the Brythonic Celtic, language of Wales, known by natives as Cymraeg, were transliterated into English. Welsh names that were documented in English often changed dramatically since the native language of Wales, which was highly inflected, did not copy well. Occasionally, however, spelling variations were carried out according to an individual's specific design: a branch loyalty within the family, a religious adherence, or even patriotic affiliations could be indicated by minor variations. The spelling variations of the name Yevand have included Jeavon, Jeavons, Jevin, Jevan, Jevon, Jevons, Javin, Gevin, Gevinn, Ievan and many more.

Prominent amongst the family during the late Middle Ages was Thomas Jevon (1652-1688), actor and playwright. He was "a dancing-master, but worked his way on to the stage, and played leading low-comedy parts in London between 1673 and 1688. He appeared as Sneak in D'Urfey's 'Fond Husband' in 1676, and made a brilliant success as Harlequin in Mountford's farcical 'Dr. Faustus.' His only published play, and probably, as a contemporary manuscript note on one of the British Museum copies says, 'the only dramatick performance of Mr. Thos. Jevon,' was 'The Devil of a Wife; or a Comical Transformation,' which was licensed...
Another 161 words (12 lines of text) are included under the topic Early Yevand Notables in all our PDF Extended History products and printed products wherever possible.

Migration of the Yevand family to Ireland

Some of the Yevand family moved to Ireland, but this topic is not covered in this excerpt.
Another 51 words (4 lines of text) about their life in Ireland is included in all our PDF Extended History products and printed products wherever possible.

Migration of the Yevand family

Many Welsh families joined their Scottish and Irish neighbors during the late 1800s and early 1900s in seeking refuge in North America. Like the Irish and Scottish, many Welsh anxiously awaited the work, freedom, and opportunities that they believed lay in North America. Those who did journey over to the United States and what became known as Canada often realized those dreams, but only through much toil and perseverance. Whenever and however these Welsh immigrants arrived in North America, they were instrumental in the creation of the industry, commerce, and cultural heritage within those two developing nations. In the immigration and passenger lists a number of early immigrants bearing the name Yevand were found: D. Gevinn, who sailed to New Orleans in 1820; Thomas Gevin, also to New Orleans, in 1823; and John Givin, who settled in Des Moines, Iowa by 1887.