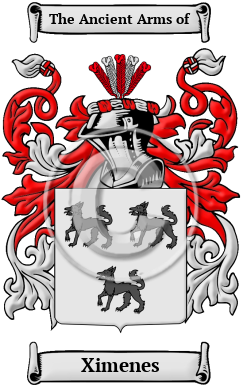 Early Origins of the Ximenes family

The surname Ximenes was first found in Old Castile, where the name originated in Visigothic times. One of the first records of the family was García Jiménez (c. 835-885) who was king of a part of Pamplona in the late 9th century. He was the progenitor of the the Jiménez dynasty, a medieval ruling family from the 9th century which made part of most of the royal houses and kingdoms of the Iberian Peninsula.

Early History of the Ximenes family

Notable bearers of the family name Ximenes Garci Jiménez, a nobleman living in Toledo in 1101; noblemen Iñigo Ximénez de Lanclares and Martín Ximénez de Alava, witnesses to a document dated 1246; Rodrigo Jiménez de Rada (1170-1247), chronicler and historian to the Royal Court of Navarre; Pedro Jiménez de Segura, Ambassador of King James the Conqueror to the court of Granada in the late 13th century; Juan Ximénez (or Jiménez) Cerdán (c. 1355-1435), a fiscal and constitutional lawyer and legal theorist who served as the Justicia Mayor of the Kingdom of Aragon from 1390 until 1423; Cardinal Francisco Jiménez de Cisneros...
Another 129 words (9 lines of text) are included under the topic Early Ximenes Notables in all our PDF Extended History products and printed products wherever possible.

Ximenes migration to the United States +

Ximenes Settlers in United States in the 18th Century

Ximenes Settlers in United States in the 19th Century