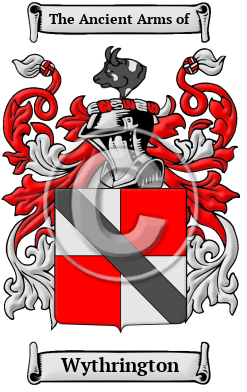 Early Origins of the Wythrington family

The surname Wythrington was first found in Northumberland where they held a family seat from very ancient times at Widdrington Castle. "High Trewhitt is 4¼ miles (N. W.) and Low Trewhitt 4½ miles (N. W. by N.) from Rothbury. These places were in the time of James I. possessed by Sir Ephraim Widdrington: the family of Clavering held the former in the reign of Charles I., but forfeited it by their attachment to the Stuarts." [1]

As one would expect the eponymous parochial chapelry of Widdrington, again in Northumberland is of special note to the family. "This place was long the seat of the Widdrington family, many of whom at various periods greatly distinguished themselves against the Scots, and on other occasions. Sir William Widdrington, in 1642, was expelled from the house of commons for raising forces in defence of Charles I., by whom, in the following year, he was elevated to the dignity of baron; after the battle of Marston-Moor, he left the kingdom, when his estates were confiscated by the parliament, but returning in the service of Charles II., he was slain at the conflict of Wigan.

William, 4th lord Widdrington, was attainted in 1715, for his share in the rebellion of that year, and his property, to the amount of £100,000, was sold for the public advantage; thus consummating the downfall of a family that had flourished during a space of seven centuries." [1]

Witherington is a tything, in the parish of Downton, union of Alderbury, hundred of Downton, Salisbury and Amesbury in Wiltshire.

Early History of the Wythrington family

Spelling variations of this family name include: Widdrington, Widrington, Witherington and many more.

Migration of the Wythrington family