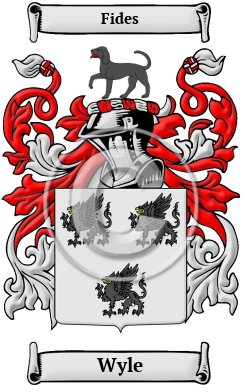 In ancient Scotland, Wyle was a Strathclyde-Briton name for someone who lived in Dumfries where today more often than not, the name is typically spelt either Wylie or Wyllie. [1]

Early Origins of the Wyle family

The surname Wyle was first found in Dumfriesshire (Gaelic: Siorrachd Dhùn Phris), where the first on record was Donald Wyly, tenant of Thornhill, Dumfriesshire, 1376. Later, John Wili held a land in Montrose, 1431, and Robert Wylye was vicar of Kilcoldrum, 1434. William Wyly, was a witness in Prestwick, Ayrshire, 1446, Robert Wyly, was a charter witness in Glasgow, 1454, and Richard Wyly, was vicar of Dundee in 1458. [1]

Early History of the Wyle family

In Medieval times, spelling and translation were not nearly so highly developed as today. They were generally carried out according to the sound and intuition of the bearer. For that reason spelling variations are extremely common among early Scottish names. Wyle has been spelled Wiley, Wylie, Whyley, Wyley, Wilie, Wyllie and others.

Another 37 words (3 lines of text) are included under the topic Early Wyle Notables in all our PDF Extended History products and printed products wherever possible.

Migration of the Wyle family to Ireland

Some of the Wyle family moved to Ireland, but this topic is not covered in this excerpt.
Another 74 words (5 lines of text) about their life in Ireland is included in all our PDF Extended History products and printed products wherever possible.

Migration of the Wyle family

Unrest, poverty, and persecution caused thousands to look for opportunity and freedom in the North American colonies. The crossing was long, overcrowded, and unsanitary, though, and came only at great expense. Many Strathclyde families settled on the east coast of North America in communities that would form the backbone of what would become the great nations of the United States and Canada. The American War of Independence caused those who remained loyal to England to move north to Canada as United Empire Loyalists. In the 20th century, Strathclyde and other Scottish families across North America began to recover their collective heritage through highland games and Clan societies. Among them: James Wiley, his wife and two sisters, who arrived in Boston, Mass in 1766; Isaac Wiley settled in Barbados in 1663; Paul Wiley aged 78; arrived in New York in 1822 with his family.