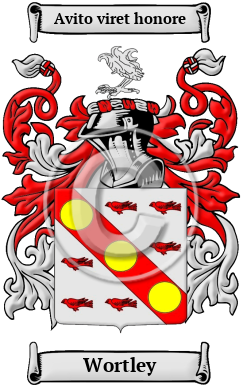 The ancestry of the name Wortley dates from the ancient Anglo-Saxon culture of Britain. It comes from when the family lived in Wortley, in the West Riding of Yorkshire. The place-name was recorded as Wirteleie in the Domesday Book. It is composed of the Old English elements wyrt, which means vegetable, and leah, which means forest clearing. The place-name meant "forest clearing where vegetables are grown." [1] English local names were originally preceded by a preposition, such as de, at, atte, by, in. After the Norman Conquest, the usual preposition was de, which was used in both English and French place-names. In French names beginning with a vowel, the de was often merged with the name. For example, de Ash would become D'ash and later, Dash. By the end of the 14th century, prepositions were frequently assimilated or dropped from the surname.

Early Origins of the Wortley family

The surname Wortley was first found in South Yorkshire at Wortley, home to Wortley Manor, a stately home which was rebuilt by Sir Richard Wortley in 1586. Today it is home to a group of local trade union activists that purchased the estate in 1951. Wedding ceremonies and day visitors are welcome. "This place, which had been for many generations the property and residence of the Wortley family, was, on the demise of Sir Francis Wortley, Bart., the last male heir, conveyed, by marriage with his daughter and heiress, to the Hon. Sidney Montagu." [2]

Early History of the Wortley family

Spelling variations in names were a common occurrence before English spelling was standardized a few hundred years ago. In the Middle Ages, even the literate spelled their names differently as the English language incorporated elements of French, Latin, and other European languages. Many variations of the name Wortley have been found, including Wortley, Wortly and others.

Notables of the family at this time include Francis Wortley of Wortley, High Sheriff of Derbyshire 1577, Custos Rotulorum of the West Riding of Yorkshire, 1579-1583; Sir Richard Wortley, of Wortley Hall, Yorkshire; and...
Another 33 words (2 lines of text) are included under the topic Early Wortley Notables in all our PDF Extended History products and printed products wherever possible.

Wortley migration to the United States +

Families began migrating abroad in enormous numbers because of the political and religious discontent in England. Often faced with persecution and starvation in England, the possibilities of the New World attracted many English people. Although the ocean trips took many lives, those who did get to North America were instrumental in building the necessary groundwork for what would become for new powerful nations. Some of the first immigrants to cross the Atlantic and come to North America bore the name Wortley, or a variant listed above:

Wortley Settlers in United States in the 17th Century

Wortley Settlers in United States in the 19th Century

Wortley Settlers in Australia in the 19th Century

Wortley Settlers in New Zealand in the 19th Century

Motto: Avito viret honore
Motto Translation: He flourishes through the honour of his ancestors.