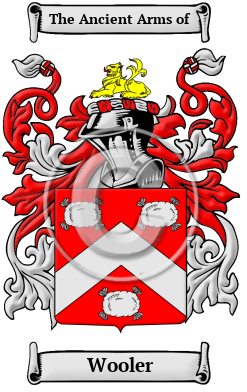 Early Origins of the Wooler family

"About Langport, co. Somerset, are persons of the labouring class who are commonly called Wooll, but they say that their real old name is Attwooll, probably a corruption of At-Wold. [2] We very much agree with this theory as the name was not an occupational name, but a local name which we shall soon discover.

In Surrey, Alan atte Wulle was registered there in the Subsidy Rolls of 1327. Interestingly, the name is not related to "wool" but means "dweller by the stream." [1]

"In the south-west, particularly in Dorset, Old English wielle, became Middle English wull, woll, instead of well, and this survives in Wool and in Wool Bridge in East Stoke which gave rise to a surname Wullebrigg in 1244. The same development has been noted in Somerset, West Sussex and West Surrey." [1]

Exploring early Dorset records, we found a parish named Wool, in the union of Wareham and Purbeck, liberty of Bindon, Wareham division, 6 miles (W. by S.) from Wareham. [3] [4]

"The church is an ancient structure, partly Norman, and partly in the early English style, with a massive tower; the pulpit hangings, though much decayed, are embellished with representations of the Twelve Apostles, worked in embroidery with gold and silver thread enriched with beads." [5]

Dating back to at least the Domesday Book of 1086 where it was recorded as Welle, [6] it literally meant "place at the spring or springs," from the Old English word "wiella." [7]

Early History of the Wooler family

Distinguished members of the family include John Wooll (1767-1833), English schoolmaster, the son of John Wooll of Winchester, gentleman, baptised at St. Thomas, Winchester, on 18 May 1767. "Wooll was instituted in 1796 to the living of Wynslade, Hampshire, but exchanged it for the rectory of Blackford, Somerset, the value of the latter benefice being within the maximum amount of preferment held to be tenable with a fellowship (information from Dr. Sewell of New College; Gent. Mag. 1796, ii. 973). In 1799 he was appointed to the head-mastership of Midhurst free grammar school, and raised the school to great efficiency. From...
Another 124 words (9 lines of text) are included under the topic Early Wooler Notables in all our PDF Extended History products and printed products wherever possible.

Wooler migration to the United States +

Wooler Settlers in United States in the 17th Century

Wooler Settlers in United States in the 18th Century

Wooler Settlers in Australia in the 19th Century