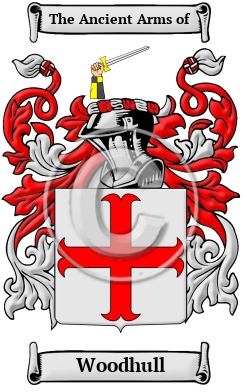 Early Origins of the Woodhull family

The surname Woodhull was first found in North Yorkshire at Woodale, a hamlet in Coverdale in the Yorkshire Dales. The place name dates back to 1223 where it was listed as Wulvedale and literally meant "valley frequented by wolves." [1] Early Yorkshire records show Jordan de la Wodehalle recorded there c. 1265. In nearby Cumberland, John del Wodhall was listed in the Subsidy Rolls for 1332. [2]

Early History of the Woodhull family

Notables of this surname at this time include: John Woodall (1556?-1643), English surgeon, born about 1556, the son of Richard Woodall of Warwick and his wife Mary. "He began life as a military surgeon in Lord Willoughby's regiment in 1591, and afterwards lived abroad at Stoad in Germany, and, knowing German well, acted as interpreter to an embassy sent thither by Queen Elizabeth. He remained eight years in Germany, travelling also in France and in Poland, where he practised the cure of the plague. In 1599 he was admitted to...
Another 90 words (6 lines of text) are included under the topic Early Woodhull Notables in all our PDF Extended History products and printed products wherever possible.

Woodhull migration to the United States +

Woodhull Settlers in United States in the 17th Century

Woodhull Settlers in United States in the 19th Century