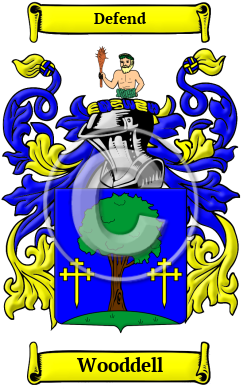 The Wooddell surname is derived from the Middle English word "wode," meaning "wood," which suggests that the original bearer of the name lived near a wood, or was perhaps employed as a woodcutter or forester.

Early Origins of the Wooddell family

The surname Wooddell was first found in Leicestershire, England. However, during ascension of William to the English throne, the family were stripped of their land holdings in Leicestershire by the king, and moved north to Dumfriesshire, Scotland. The first of the family in this region are said to descend from a Norman knight by the name of Ernald de Bosco (Bosco is a Latinized form of wood,) who accompanied William the Conqueror. A number of Boscos are thought to have have moved northwards with other Anglo-Norman families in the train of Margaret, King Malcolm Ceanmore's second wife, to escape the ponderous rule of William.

Early History of the Wooddell family

Spelling variations of this family name include: Vould, Voud, Vode, Would, Wood, Woods, Wode, Woid, Wodes and many more.

Notable among the family at this time was Sir Andrew Wood (d. 1515) of Largo, Fife, a Scottish Sea Captain, who rose to become Lord High Admiral of Scotland, he held the lands at Kirkton of Largo in Fife, and is said to be the scion of the Chiefly line of the Woods. Family lore...
Another 55 words (4 lines of text) are included under the topic Early Wooddell Notables in all our PDF Extended History products and printed products wherever possible.

Migration of the Wooddell family to Ireland

Some of the Wooddell family moved to Ireland, but this topic is not covered in this excerpt.
Another 70 words (5 lines of text) about their life in Ireland is included in all our PDF Extended History products and printed products wherever possible.

Migration of the Wooddell family