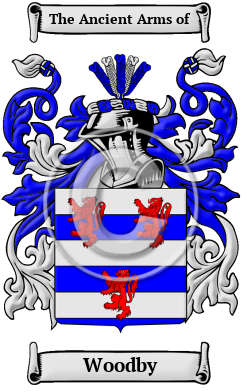 Early Origins of the Woodby family

The surname Woodby was first found in Devon at Woodbury, a parish, and formerly a market-town, in the union of St. Thomas, hundred of East Budleigh. [1]

The name is derived from the Old English word Wodebif meaning "the Stronghold by or in the Wood [Old English wudu + burh, burg (dat. byrig] " [2]

Alternatively, the name could have originated in Woodborough, a parish, in the union of Basford, S. division of the wapentake of Thurgarton in Nottinghamshire. There is also a hamlet so named in Somerset and a parish named Woodborough in Wiltshire. [3]

Nottinghamshire is the place where the family were first recorded for it is here that Ralph de Wudeburc was listed in the Pipe Rolls of 1194. Years later, John de Wodeburgh was listed in the Feet of Fines for Essex in 1324. [4]

Early History of the Woodby family

This web page shows only a small excerpt of our Woodby research. Another 70 words (5 lines of text) covering the years 1455 and 1487 are included under the topic Early Woodby History in all our PDF Extended History products and printed products wherever possible.

More information is included under the topic Early Woodby Notables in all our PDF Extended History products and printed products wherever possible.

In the United States, the name Woodby is the 14,144th most popular surname with an estimated 2,487 people with that name. [5]

Woodby migration to the United States +

Woodby Settlers in United States in the 17th Century