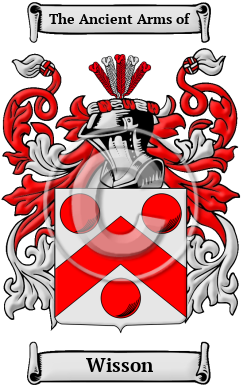 Early Origins of the Wisson family

The surname Wisson was first found in Lanarkshire (Gaelic: Siorrachd Lannraig) a former county in the central Strathclyde region of Scotland, now divided into the Council Areas of North Lanarkshire, South Lanarkshire, and the City of Glasgow, where they held a family seat from ancient times in the reign of King Malcolm IV in 1153, in the village of Wicestun.

Early History of the Wisson family

The variation in the spelling of Medieval names is a result of the lack of spelling rules in the English language prior to the last few hundred years. Before that time, scribes spelled according to sound, often varying the spelling of name within a single document. Wisson has appeared as Whiston, Wiston and others.

Notable amongst the family at this time was Sir Henry, Lord of Wiceston; and William Whiston (1667-1752), an English theologian, historian, and mathematician, best known for his translation of the Antiquities of the Jews. His son, John Whiston (d. 1780), was an English bookseller "and was probably born within five years of his father's marriage...
Another 55 words (4 lines of text) are included under the topic Early Wisson Notables in all our PDF Extended History products and printed products wherever possible.

Migration of the Wisson family to Ireland

Some of the Wisson family moved to Ireland, but this topic is not covered in this excerpt. More information about their life in Ireland is included in all our PDF Extended History products and printed products wherever possible.

Wisson migration to the United States +

Wisson Settlers in United States in the 17th Century

Historic Events for the Wisson family +