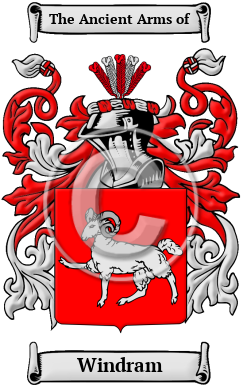 Early Origins of the Windram family

The surname Windram was first found in Lanarkshire (Gaelic: Siorrachd Lannraig) a former county in the central Strathclyde region of Scotland, now divided into the Council Areas of North Lanarkshire, South Lanarkshire, and the City of Glasgow, where they held a family seat in their territories. The Pictish influence on Scottish history diminished after Kenneth Macalpine became King of all Scotland. But those east coast families still played an important role in government and were more accessible to Government than their western highland counterparts. Allegiances were important to Scottish middle age survival. Later they held a family seat at Clydesdale how held the Baron of Wiston from the 14th century.

Early History of the Windram family

Notable amongst the Clan at this time was John Winram, Wynram or Winraham (1492?-1582), Scottish reformer, descended from the Winrams or Winrahams of Kirkness or Ratho, Fifeshire. [1] George Winram Lord Libbertoun (d. 1650), Scottish judge, son of James Winram of Liberton in Midlothian. "He was a friend of James Hamilton, third Marquis (afterwards first...
Another 53 words (4 lines of text) are included under the topic Early Windram Notables in all our PDF Extended History products and printed products wherever possible.

Windram migration to the United States +

Windram Settlers in United States in the 19th Century