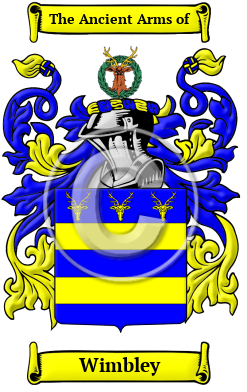 The Wimbley surname is most likely of Anglo-Saxon origin, and in its earliest forms appeared as Wynderlick and similar variants.

Early Origins of the Wimbley family

The surname Wimbley was first found in Winmarleigh, Lancashire where they held a family seat from very early times. The Domesday Book lists a Wimbald and his four sons, as well as several listings of the name of Wimbaldlai. [1]

Bearers of this family name came to own land in Cheshire and Lancaster. During the reign of Henry III (1216-1272,) Gregory de Wimberley held lands in Lancashire, known as Winmarleigh. In 1344, a Thomas de Wimbersley, styled "le Gentil," became a part owner of the Winmarleigh manor.

The Memorials - Family of Wimberley notes the following: "The family of Wimberley or Wimbaldesley was settled at an early date, and held manors in the counties of Cheshire and Lancaster. The name is found spelt in sundry old deeds and records in different ways, viz., Wimbaldesley, Wymbaldesley, Wimbaldsley, Wimbaldeslegh, Wimberley, Wimbersley, Wimberleigh, Wymberslcy, Wemberesley, Whimberley, and probably Winmarleigh. As late as the year A.D. 1569, in a will made by one of the family, the name is found Wimberley, Wymberley, and Wymberlie."

"The names of four sons of Wimbald are registered in Domesday Book, viz., Wimbald, Leofwin, Albert, and Levenot. Sundry manors are registered in the same book under the name of Wimbaldlai, indicating a Saxon origin. We find from Lyson's Magna Britannia, vol. II., part II., p. 694, that one of these in Cheshire retained its ancient name in his time. He says - " The manor of Wimbersley or Wimbaldesley, with the hall of Lee, Ley, or Lea, belonged anciently to the family of Wimbaldesley ; it was afterwards for several generations in the family of Holt, and appears to have passed about the year 1495 to the Cottons, who in 1545 sold it to the Breretons of Ashley."

Early History of the Wimbley family

This web page shows only a small excerpt of our Wimbley research. Another 87 words (6 lines of text) covering the years 1455, 1485 and 1500 are included under the topic Early Wimbley History in all our PDF Extended History products and printed products wherever possible.

More information is included under the topic Early Wimbley Notables in all our PDF Extended History products and printed products wherever possible.

In the United States, the name Wimbley is the 13,876th most popular surname with an estimated 2,487 people with that name. [2]

Migration of the Wimbley family

Some of the first settlers of this family name or some of its variants were: John Wimberly, who received a land grant of 300 acres in Nansemond County, Virginia in 1672; and an additional 400 acre land grant in 1673 for paying the passage of other persons to the Virginia Colony, William Wimberly and Peter Wimberly, who arrived in Virginia in 1672 as indentured servants of Thomas Milner, who received his land grant on Dumplin Island, Nansemond County. The 1820 census of Georgia shows several bearers of the name Wimberly in Burke and Jones counties. For more reading about bearers of this family name, we recommend &quot.