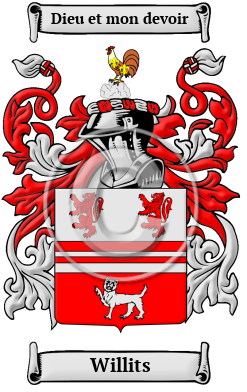 The surname Willits is derived from the diminutive form of the Old English personal name "Will" or "William." Thus, the name refers to a "son of Willet."

Early Origins of the Willits family

The surname Willits was first found in Essex, where the Willits family held a family seat from very ancient times. Records of the name in Essex and the surrounding shires date back to the Middle Ages, during the years immediately following the Norman Conquest.

Early History of the Willits family

Spelling variations of this family name include: Willet, Willett, Willhite, Willot, Willitt, Willets and many more.

Notables of this surname at this time include: Andrew Willet (1562- 1621), an English clergyman and controversialist. Born at Ely in 1562, he was son of Thomas Willet (1511?-1598), who began his career as a public notary, and officiated as such at the consecration of Archbishop Parker. [1] Deborah "Deb" Willet...
Another 49 words (4 lines of text) are included under the topic Early Willits Notables in all our PDF Extended History products and printed products wherever possible.

In the United States, the name Willits is the 14,147th most popular surname with an estimated 2,487 people with that name. [2]

Willits Settlers in Australia in the 19th Century