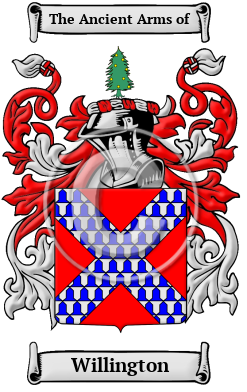 The Willington surname is classed as a habitation name; that is, one derived from a pre-existing place name. There are several places in various counties so named in Britain.

Early Origins of the Willington family

The surname Willington was first found in Burton, Yorkshire, where early records, including documents from the Burton Chartulary record Nicholas de Wilentona, in 1251. Willington in Derbyshire has an interesting story to tell about the family. "The property at the Domesday Survey belonged partly to the king, and partly to Ralph Fitzhubert. Henry II. gave one of the two manors to Burton Abbey. The other appears to have been given with the church, by the family of Willington, to the prior and convent of Repton." [1]

Much farther to the south in the parish of St. Pinnock, Cornwall, we found this interesting entry: "a manor called Trevillis, was, so early as the days of Richard II. in the family of Willington. It was afterwards in moieties, between (the families of Mohun and Hobartes, about the year 1620." [2]

Early History of the Willington family

This web page shows only a small excerpt of our Willington research. Another 118 words (8 lines of text) covering the years 1662, 1330 and 1322 are included under the topic Early Willington History in all our PDF Extended History products and printed products wherever possible.

Spelling variations of this family name include: Willington, Wilington, Wilentona,Wilenton and others.

More information is included under the topic Early Willington Notables in all our PDF Extended History products and printed products wherever possible.

Migration of the Willington family to Ireland

Some of the Willington family moved to Ireland, but this topic is not covered in this excerpt.
Another 31 words (2 lines of text) about their life in Ireland is included in all our PDF Extended History products and printed products wherever possible.

Willington migration to the United States +

Willington Settlers in United States in the 17th Century

Willington Settlers in United States in the 18th Century

Willington Settlers in United States in the 19th Century

Willington Settlers in Australia in the 19th Century

Willington Settlers in West Indies in the 17th Century