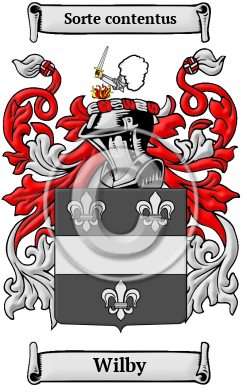 The name Wilby was brought to England in the great wave of migration following the Norman Conquest of 1066. The Wilby family lived in Lincolnshire, in the parish of Welby.

Early Origins of the Wilby family

The surname Wilby was first found in Lincolnshire at Welby, a village and civil parish in the South Kesteven district, historically in the union of Grantham, wapentake of Aswardhurn. The place name was first listed in the Domesday Book of 1086 at Wellebi [1] and literally meant "farmstead or village by a spring or stream," from the Old English word "wella" + the Old Scandinavian word "by." [2]

A far as the surname is concerned, while there is no doubt the family came from this local, there is question about the original progenitor. One reference cites that John, the Lord of Castleton, around the time of William Conqueror's invasion of England in 1066 A.D. and another cites Sir Thomas Welby, who held the manor of Frieston with Poynton Hall c. 1216. [3]

Sir William Welby was also listed as possessing property between 1307 and 1327. He married the heiress of Multon of Multon and that became the principal family seat until the end of the 16th century. [3]

Robert Waldby (d. 1398) was an English divine, Archbishop of York and claims descent from Waldby, near Hull. "John Waldby (d. 1393?), was English provincial of the Austin friars, and wrote a number of expository works still preserved in manuscript in the Bodleian and other libraries, is said to have been a brother of Robert Waldby. " [4]

Early History of the Wilby family

Endless spelling variations are a prevailing characteristic of Norman surnames. Old and Middle English lacked any definite spelling rules, and the introduction of Norman French added an unfamiliar ingredient to the English linguistic stew. French and Latin, the languages of the court, also influenced spellings. Finally, Medieval scribes generally spelled words according to how they sounded, so one person was often referred to by different spellings in different documents. The name has been spelled Welbey, Welby, Welbie, Welbye and others.

Outstanding amongst the family at this time was several who were Sherriffs of Lincolnshire, beginning with Roger Welby in 1397; followed by Richard Welby in 1471, Thomas Welby in 1492, and Richard Welby in 1561. John Wilbye (c.1574-1638), was an English madrigal composer and "probably a native of the eastern counties, where the name was common. A John, son of John Wilbye or Milbye, was baptised in St. Mary's, Bury St. Edmunds, 15 Jan. 1572-1573; and another John, son of Thomas Wilbye, on 27 Sept. " [4] Henry Welby (d. 1636), was the English author of 'The Phoenix of these late Times,'...
Another 105 words (8 lines of text) are included under the topic Early Wilby Notables in all our PDF Extended History products and printed products wherever possible.

Migration of the Wilby family to Ireland

Some of the Wilby family moved to Ireland, but this topic is not covered in this excerpt. More information about their life in Ireland is included in all our PDF Extended History products and printed products wherever possible.

Wilby migration to the United States +

To escape the political and religious persecution within England at the time, many English families left for the various British colonies abroad. The voyage was extremely difficult, though, and the cramped, dank ships caused many to arrive in the New World diseased and starving. But for those who made it, the trip was most often worth it. Many of the families who arrived went on to make valuable contributions to the emerging nations of Canada and the United States. An inquiry into the early roots of North American families reveals a number of immigrants bearing the name Wilby or a variant listed above:

Wilby Settlers in United States in the 17th Century

Wilby Settlers in United States in the 20th Century

Wilby Settlers in Canada in the 20th Century

Wilby Settlers in Australia in the 19th Century

Wilby Settlers in New Zealand in the 19th Century