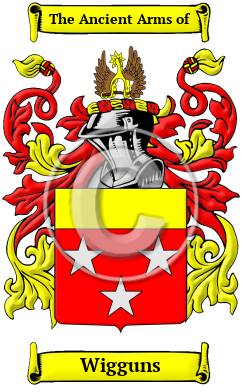 The ancient and distinguished surname Wigguns indicates "son of Wigand," a personal name derived from the Breton name "Wiucon," meaning "high and noble." [1] This name was introduced into England at the time of the Norman Conquest of 1066. Singular forms of the name were still found in Normandy as late as 1198: Radulphus Wigan; and Richard Wiguen. [2]

Early Origins of the Wigguns family

The surname Wigguns was first found in the county of Cambridgeshire, where one named Wighen [3] was listed in the Domesday Book in 1086. Another early bearer of the name was Radulfus filius Wigein, who was living in Leicestershire in 1163. [4]

Alternatively, the family could have originated in Wigan a parish, borough, and markettown, which has separate jurisdiction, and the head of a union, chiefly in the hundred of West Derby. [5] [6] [7]

"This place is stated by Camden to have been originally called Wibiggin. The nucleus of the town is supposed by Whitaker to have been a Saxon castle, but its origin should perhaps be assigned to a still earlier period, as three Roman roads unite here. The vicinity is said to have been the scene of some sanguinary battles between the Britons, under their renowned King Arthur, and the Saxons; and the discovery, about the middle of the 18th century, of a large quantity of human bones, and the bones and shoes of horses, over an extensive tract of ground near the town, tends to confirm this opinion. " [5]

Early History of the Wigguns family

Outstanding amongst the family at this time was Captain Thomas Wiggin (Wiggins, Wiggan, or Wiggans) (1592-1667), the 1st Governor of the Upper Plantation of New Hampshire (1633?-1637.) He was born in Bishops Itchington, Warwickshire and arrived in New England on the Winthrop Fleet. By 1631 he had been appointed by the proprietors of the "Upper" or "Dover" Plantation to be their chief agent or governor. He settled in what is now Stratham. He was a close ally of Governor John Winthrop of the neighboring Massachusetts Bay Colony. In 1632 he traveled back to England, and returned the following year with expanded...
Another 145 words (10 lines of text) are included under the topic Early Wigguns Notables in all our PDF Extended History products and printed products wherever possible.

Migration of the Wigguns family to Ireland

Some of the Wigguns family moved to Ireland, but this topic is not covered in this excerpt.
Another 60 words (4 lines of text) about their life in Ireland is included in all our PDF Extended History products and printed products wherever possible.

Migration of the Wigguns family

Some of the first settlers of this family name or some of its variants were: Captain Thomas Wiggin (1592-1667), who came to New England in 1630 and became the first Governor of the Upper Plantation of New Hampshire; Katherine Wiggin, who sailed to Boston in 1633.