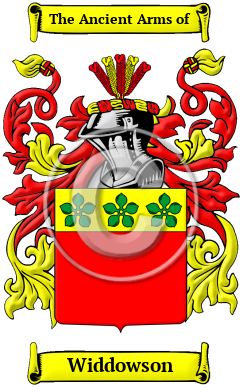 The name Widdowson was originally a baptismal name as in "the son of Wydo" which is English for Guido or Guy [1] or it was an Old English name derived from "widuwe, widewe (widow)" [2]

Early Origins of the Widdowson family

The surname Widdowson was first found in Norfolk where William filius Wydo was listed there in the Hundredorum Rolls of 1279. The same roll lists Reginald filius Wydonis in Hunts county. Other early variants of the name include Thomas Wydowe who was listed during the reign of Richard II (1367-1400) and much later Annabella Wydow was listed in the Yorkshire Poll Tax Rolls of 1379. This latter listing is quite unique as at this time, female entries were very rare. [1]

Early History of the Widdowson family

Distinguished members of the family include David Vernon Widder (1898-1990), an American mathematician. Giles Widdowes (1588?-1645), was an English divine, born about 1588, son of Thomas Widdowes of Mickleton, Gloucestershire and was probably matriculated at Oriel College, Oxford, in 1603-1604. [3] Robert Wydow (d. 1505), was an English poet and musician, born at Thaxted, Essex. "His stepfather, a...
Another 56 words (4 lines of text) are included under the topic Early Widdowson Notables in all our PDF Extended History products and printed products wherever possible.

Widdowson Settlers in Australia in the 19th Century