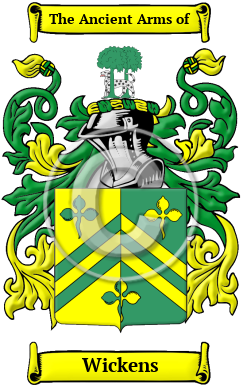 The ancient and distinguished surname Wickens is of English origin. It is derived from the Old English "wic," which refers to an outlying settlement, particularly a dairy farm or salt works, dependent on a larger village; the surname would denote someone who worked or resided at one of these settlements. The name Wickens may also be derived from a place of the same name; there are villages so named in the counties of Cambridgeshire and Northamptonshire.

Early Origins of the Wickens family

The surname Wickens was first found in Northampton where they held a family seat from very ancient times. The earliest recorded bearer of the name was Thomas de le Wikin, who was living in Norfolk in 1275.

Early History of the Wickens family

This web page shows only a small excerpt of our Wickens research. Another 53 words (4 lines of text) are included under the topic Early Wickens History in all our PDF Extended History products and printed products wherever possible.

Spelling variations of this family name include: Wickens, Wickans, Wickins, Wicking, Wiggins and others.

More information is included under the topic Early Wickens Notables in all our PDF Extended History products and printed products wherever possible.

Migration of the Wickens family to Ireland

Some of the Wickens family moved to Ireland, but this topic is not covered in this excerpt. More information about their life in Ireland is included in all our PDF Extended History products and printed products wherever possible.

Wickens migration to the United States +

Wickens Settlers in United States in the 19th Century

Wickens Settlers in Canada in the 19th Century

Wickens Settlers in Australia in the 19th Century

Wickens Settlers in New Zealand in the 19th Century