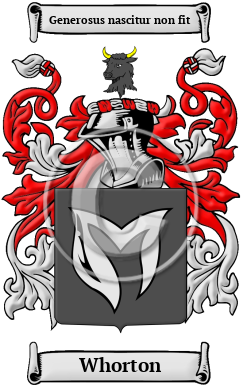 Early Origins of the Whorton family

The surname Whorton was first found in towns and civil parishes in Westmorland, Cheshire or Lincolnshire named Wharton. The oldest local was in Cheshire where the place name was listed as Wanetune [1] in the Domesday Book of 1086. Years later this village was to be known as Waverton in 1216. Literally the village probably meant "farmstead by a swaying tree," from the Old English "waefree" + "tun." [2]

But we must look to Westmorland (now known as Cumbria) for Wharton, a civil parish near Kirkby Stephen in the Eden District for the oldest records of the surname. "The Hall, once a large quadrangular building with a tower at each angle, was the princely residence of Philip, the celebrated Duke of Wharton, and his ancestors, but is now occupied as a farmhouse. The estates and manorial rights of the Whartons are now possessed by the Earl of Lonsdale." [3]

During the Dissolution of the Monasteries (1536-1541), the manor of Langdale in Westmorland was sold to the Wharton family.

Early History of the Whorton family

Spelling variations of this family name include: Wharton, Warton and others.

In the United States, the name Whorton is the 5,974th most popular surname with an estimated 4,974 people with that name. [4]

Migration of the Whorton family to Ireland

Some of the Whorton family moved to Ireland, but this topic is not covered in this excerpt. More information about their life in Ireland is included in all our PDF Extended History products and printed products wherever possible.

Whorton migration to the United States +

Whorton Settlers in United States in the 17th Century

Whorton Settlers in Australia in the 19th Century

Motto: Generosus nascitur non fit
Motto Translation: The gentleman is born not made.