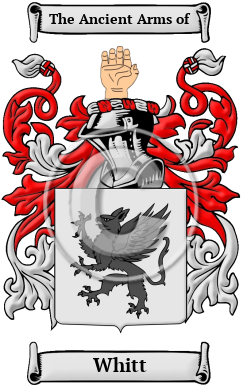 Early Origins of the Whitt family

The surname Whitt was first found in Lincolnshire, where they held a family seat from very ancient times, before and after the Norman Conquest of 1066. The Domesday Book of 1086 has entries for Alwin Albus, otherwise Wit and the name is also spelt Uuit and Uite. [1] [2] [3]

The name is thought to have been an "Anglo-Saxon personal name Wit(t)a-Wise Man, Councillor [Old English wita, sage, &c.] Witta was an early descendant of Woden and ancestor of the Kentish kings." [4] Witta is believed to have been a medieval Bishop of Lichfield. He was consecrated in 737 and died between 749 and 757.

Early History of the Whitt family

This web page shows only a small excerpt of our Whitt research. Another 102 words (7 lines of text) covering the years 1296, 1364 and 1778 are included under the topic Early Whitt History in all our PDF Extended History products and printed products wherever possible.

Spelling variations of this family name include: Wytt, Witt, Witts, Wyght, Wythe, Wicht and others.

More information is included under the topic Early Whitt Notables in all our PDF Extended History products and printed products wherever possible.

In the United States, the name Whitt is the 1,868th most popular surname with an estimated 17,409 people with that name. [5]

Whitt migration to the United States +

Whitt Settlers in United States in the 17th Century

Whitt Settlers in United States in the 19th Century

Whitt Settlers in United States in the 20th Century

Historic Events for the Whitt family +