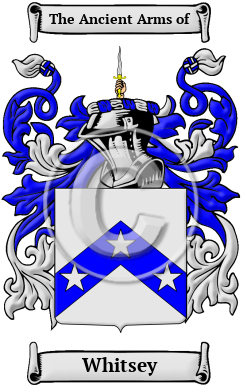 Early Origins of the Whitsey family

The surname Whitsey was first found in Oxfordshire where the Hundredorum Rolls of 1273 list early spelling of the name: Thomas ate Wytheg; William ate Wytheg; and Nicholas de la Wytheg. The same rolls listed Walter de la Wythege in Southamptonshire. "This surname is derived from a geographical locality. 'at the white hay.' "[1]

Another early rolls included John Witege at Eynsham, Oxfordshire in 1186. Later, Bartholomew atte Withegh was found in the Subsidy Rolls of Sussex in 1332 and later again, Edmund de Whitehey was listed in the Assize Rolls for Essex in 1351. [2]

Early History of the Whitsey family

Spelling variations of this family name include: Whitty, Witty and others.

Notable amongst the family name during their early history was Mr. Thomas Whitty, a clothier, who developed the idea from an attempt to imitate the Turkey fabrics in Axminster, Devon in 1755...
Another 31 words (2 lines of text) are included under the topic Early Whitsey Notables in all our PDF Extended History products and printed products wherever possible.

Migration of the Whitsey family to Ireland

Some of the Whitsey family moved to Ireland, but this topic is not covered in this excerpt.
Another 149 words (11 lines of text) about their life in Ireland is included in all our PDF Extended History products and printed products wherever possible.

Whitsey Settlers in Australia in the 19th Century