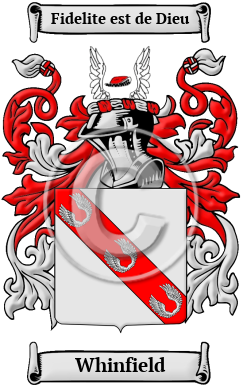 Early Origins of the Whinfield family

The surname Whinfield was first found in Suffolk at Wingfield, an ancient Saxon village that dates back to c. 1035 when it was listed as Wingefeld and probably meant "open land of the family or followers of a man called Wiga," from the Old English personal name + "-inga" + "feld." [1]

"The Wingfields of Wingfield and Letheringham, both in Suffolk, a distinguished family of the fourteenth and fifteenth centuries, are traced nearly to the Conquest, though they do not appear to have been lords of the manor or castle of Wingfield before the reign of Edward II. " [2]

Wingfield Castle, was the ancestral home of the Wingfield family and their heirs. Of note was Sir John de Wingfield (died c. 1361), Chief Administrator to Edward the Black Prince, a title received c. 1351 as a result of his devotion his prince including Crecy in 1346 and in the Normandy campaign in 1347-1348. Wingfield College "was founded on the south side of the church [of Wingfield] by the will of Sir John Wingfield, in 1362, for a provost and nine priests." [3]

Early History of the Whinfield family

Spelling variations of this family name include: Winfield, Wingfield and others.

Distinguished members of the family include Sir John Wingfield (d. 1361), High Steward and Councilor to the Prince of Wales, who accompanied the Prince on his campaigns in France, Chief Administrator to Edward the Black Prince; Sir Richard Wingfield, (1456-1525), from Letheringham, Suffolk, English courtier, Chancellor of the Duchy of Lancaster (1523-1525); Sir Robert Wingfield of Letheringham, Suffolk (1403-1454), an English knight; Sir Robert Wingfield (1464?-1539), an English diplomat; Lady Bridget Wingfield (died 1534) close friend and lady-in-waiting to Anne Boleyn; Richard Wingfield, 1st Viscount Powerscourt (1550-1634), an English...
Another 88 words (6 lines of text) are included under the topic Early Whinfield Notables in all our PDF Extended History products and printed products wherever possible.

Migration of the Whinfield family to Ireland

Some of the Whinfield family moved to Ireland, but this topic is not covered in this excerpt.
Another 32 words (2 lines of text) about their life in Ireland is included in all our PDF Extended History products and printed products wherever possible.

Whinfield migration to the United States +

Whinfield Settlers in United States in the 19th Century