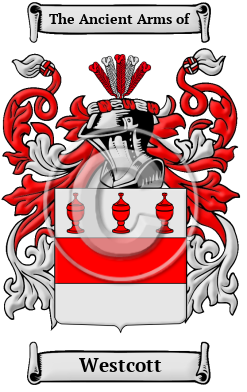 The Westcott surname is thought to pre-date the Norman invasion of Great Britain. It is derived from the Old English words "West" and "cot," together meaning "west cottage or shelter." The name was used by several different parishes and hamlets in counties Gloucestershire, Buckinghamshire and Berkshire. As a surname, it would have been first used by someone who came from Westcott.

Early Origins of the Westcott family

The surname Westcott was first found in Devon where the first recorded instance of the name seems to be of Westcote, in the Domesday Book of 1086. Other early references include Tubertus de Westcotta, listed in the Pipe Rolls for Berkshire in 1170, and Robert de Westecote listed in the Assize Rolls of Staffordshire in 1221. [1]

"The Westcotts are now established in the North Molton district. Westcote was the name of an old gentle family of Shobrook that dated back to the reign of Henry VIII. The Westacotts are at home in Barnstaple and its vicinity. Martin Westacot was a Barnstaple man in the reign of Anne. Westacott is the name of hamlets in North Devon. There are also hamlets named Westcott in the county. In fact, Westcott and Westcote are common place - names in the south of England. Wescott is the Somerset form of the surname." [4]

Early History of the Westcott family

This web page shows only a small excerpt of our Westcott research. Another 71 words (5 lines of text) covering the years 1524, 1582, 1624, 1636 and 1624 are included under the topic Early Westcott History in all our PDF Extended History products and printed products wherever possible.

Spelling variations of this family name include: Westcote, Westcot, Westcott, Westecott, Westacott and others.

Notables of the family at this time include Sir Thomas Westcote of WestcoteWestcott; and Sebastian Westcott (also spelt Wescott or Westcote) (c.1524-1582), an English organist at St. Paul's Cathedral, best known for staging performances of plays with the Children of Paul's. Thomas Westcote (fl. 1624-1636), was an English topographer, baptised at Shobrooke in Devonshire. He was the third son of Philip Westcote...
Another 60 words (4 lines of text) are included under the topic Early Westcott Notables in all our PDF Extended History products and printed products wherever possible.

In the United States, the name Westcott is the 5,427th most popular surname with an estimated 4,974 people with that name. [5]

Westcott migration to the United States +

Westcott Settlers in United States in the 17th Century

Westcott Settlers in United States in the 18th Century

Westcott Settlers in United States in the 19th Century

Westcott Settlers in Canada in the 18th Century

Westcott Settlers in Australia in the 19th Century

Westcott Settlers in New Zealand in the 19th Century

Historic Events for the Westcott family +

Suggested Readings for the name Westcott +