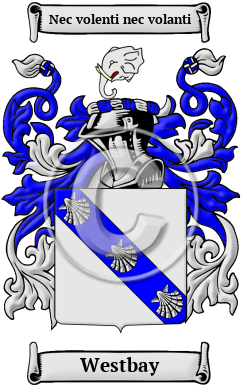 The origins of the Westbay name lie with England's ancient Anglo-Saxon culture. It comes from when the family lived in Westby, a small village in Lincolnshire. The name was also found in Lancashire and West Yorkshire. The place name Westby comes from the Old Norse words vestr, or "west," and býr, meaning "a settlement."

Early Origins of the Westbay family

The surname Westbay was first found in Lancashire. "The family assert a Saxon descent, and say that they were settled in the hundred of Amounderness, in that county, before the Conquest; but the first member of the family mentioned in the pedigree is Gilbert de Westby, sheriff of Lancashire in 1238." [1]

We will not discount this reference's claim but wish to advise the reader that the Assize Rolls of Lincolnshire does list William de Westebi in 1219. [2]

The Domesday Book of 1086 lists the pace name as Westbi. [3] The township of Medlar with Wesham in the parish of Kirkham was home to early members of the family. "On the dissolution of monasteries, the land seems to have been granted or sold to the family of Westby; in the reign of Philip and Mary, William Westbye held 'Medlarghe,' 'Wessham,' and other property in this quarter, and his descendants long continued to reside at Mowbrick Hall, now a farmhouse." [4]

This latter source also notes the family held estates in Medlar, with Wesham, again in Lancashire: "On the dissolution of monasteries, the land seems to have been granted or sold to the family of Westby; in the reign of Philip and Mary, William Westbye held 'Medlarghe,' 'Wessham,' and other property in this quarter, and his descendants long continued to reside at Mowbrick Hall, now a farmhouse." [4]

Early History of the Westbay family

This web page shows only a small excerpt of our Westbay research. Another 54 words (4 lines of text) covering the years 1233 and 1233 are included under the topic Early Westbay History in all our PDF Extended History products and printed products wherever possible.

Before the last few hundred years, the English language had no fast system of spelling rules. For that reason, spelling variations are commonly found in early Anglo-Saxon surnames. Over the years, many variations of the name Westbay were recorded, including Westby, Westerby, Westbee, Westbie and others.

More information is included under the topic Early Westbay Notables in all our PDF Extended History products and printed products wherever possible.

Migration of the Westbay family to Ireland

Some of the Westbay family moved to Ireland, but this topic is not covered in this excerpt. More information about their life in Ireland is included in all our PDF Extended History products and printed products wherever possible.

Migration of the Westbay family

To escape oppression and starvation at that time, many English families left for the "open frontiers" of the New World with all its perceived opportunities. In droves people migrated to the many British colonies, those in North America in particular, paying high rates for passages in cramped, unsafe ships. Although many of the settlers did not make the long passage alive, those who did see the shores of North America perceived great opportunities before them. Many of the families that came from England went on to make essential contributions to the emerging nations of Canada and the United States. Research into various historical records revealed some of first members of the Westbay family emigrate to North America: Barbara Westby, who arrived in Maryland in 1656; Edward Westby, who came to Virginia in 1664; Joseph Westby and family, who came to New York in 1830; as well as James Westby, who was on record in the census of Ontario of 1871..