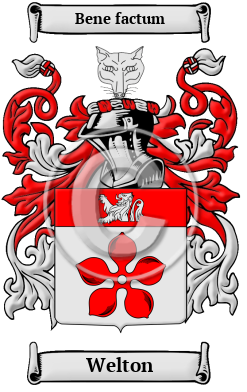 The name Welton was carried to England in the enormous movement of people that followed the Norman Conquest of 1066. The Welton family lived in Northamptonshire, at Weldon.

Early Origins of the Welton family

The surname Welton was first found in Northamptonshire where they held a family seat as Lords of the manor of Weldon, and are conjecturally descended from Robert de Bucy, a Norman Baron who acquired Weldon, an ancient Roman villa, from Olaf, from King William for his assistance at the Battle of Hastings in 1066.

"The Tower, the manorial seat of the ancient family of Welton [in Northumberland], is fast going to decay; there are still remaining in tolerable preservation, two handsome rooms with Oriel windows. The Hall, an ancient mansion which, according to an inscription on the walls, was repaired in 1614, is still occupied." [1]

Welton is also a village and civil parish in the East Riding of Yorkshire which literally means "farmstead by a spring or stream." [2]

Early History of the Welton family

Endless spelling variations are a prevailing characteristic of Norman surnames. Old and Middle English lacked any definite spelling rules, and the introduction of Norman French added an unfamiliar ingredient to the English linguistic stew. French and Latin, the languages of the court, also influenced spellings. Finally, Medieval scribes generally spelled words according to how they sounded, so one person was often referred to by different spellings in different documents. The name has been spelled Weldon, Veldon, Velton and others.

Outstanding amongst the family at this time was Gilbert Welton (or Gilbert de Wilton), Bishop of Carlisle (1352-1362); Sir Anthony Weldon (1583-1648), an English 17th Century courtier and politician, purported author of "The Court and Character of King James I."; and John Weldon (1676-1736), an English composer. Sir Anthony Weldon (d. 1649?), was an "English historical writer, of Swanscombe, Kent, descended from a younger branch of the family of Weltden of Northumberland. His father, Sir Ralph Weldon, knighted on 24 July 1603, was clerk of the Green Cloth to Queen Elizabeth and James I. His eldest...
Another 95 words (7 lines of text) are included under the topic Early Welton Notables in all our PDF Extended History products and printed products wherever possible.

In the United States, the name Welton is the 5,895th most popular surname with an estimated 4,974 people with that name. [3]

Migration of the Welton family to Ireland

Some of the Welton family moved to Ireland, but this topic is not covered in this excerpt.
Another 89 words (6 lines of text) about their life in Ireland is included in all our PDF Extended History products and printed products wherever possible.

Welton migration to the United States +

To escape the political and religious persecution within England at the time, many English families left for the various British colonies abroad. The voyage was extremely difficult, though, and the cramped, dank ships caused many to arrive in the New World diseased and starving. But for those who made it, the trip was most often worth it. Many of the families who arrived went on to make valuable contributions to the emerging nations of Canada and the United States. An inquiry into the early roots of North American families reveals a number of immigrants bearing the name Welton or a variant listed above:

Welton Settlers in United States in the 17th Century

Welton Settlers in United States in the 18th Century

Welton Settlers in United States in the 19th Century

Welton Settlers in United States in the 20th Century

Welton Settlers in Canada in the 19th Century

Welton Settlers in Australia in the 19th Century