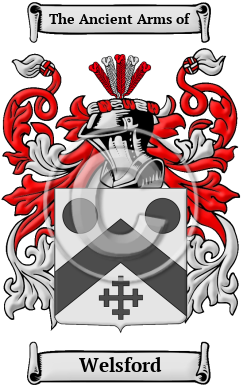 The Welsford surname and its variations are habitation names that have been taken on from Welford in Berkshire, Warwickshire, Gloucestershire, and Northamptonshire. These place names are generally derived from the Old English "welig," meaning "willow," or "well," denoting "a spring," combined with "ford." [1] [2]

Early Origins of the Welsford family

The surname Welsford was first found in Somerset where Roger de Wellesford was recorded in the Subsidy Rolls for 1327. [5] Richard de Welleford was registered in London temp. Edward II, according to the Placita de Quo Warranto. [1]

Early History of the Welsford family

This web page shows only a small excerpt of our Welsford research. Another 119 words (8 lines of text) covering the years 1190, 1606, 1650 and 1461 are included under the topic Early Welsford History in all our PDF Extended History products and printed products wherever possible.

More information is included under the topic Early Welsford Notables in all our PDF Extended History products and printed products wherever possible.

Welsford migration to the United States +

Welsford Settlers in United States in the 19th Century

Welsford Settlers in Canada in the 19th Century

Welsford Settlers in Australia in the 19th Century