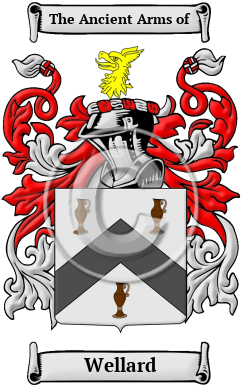 The vast movement of people that followed the Norman Conquest of England in 1066 brought the Wellard family name to the British Isles. Wellard comes from the Norman given name Willard. This name is derived from the Germanic roots will, meaning desire, and heard, meaning strong or hard. [1]

Early Origins of the Wellard family

The surname Wellard was first found in east Kent and Sussex where they were Lords of the Manor of Eastbourne. The family were originally named Villiard, or Guillarrt, and were from Caen in Normandy in pre Conquest times. [2] In the Domesday Book they are recorded variously as Wielardus, Wilardus, and Wlward. [3] [4] Further speculation on the origin of this distinguished family name of the U.S.A., can be deduced from the Willard Memoir by Joseph Willard published in Boston Mass. in 1858. [4] Woollard is a small village on the River Chew in the Chew Valley in East Somerset. Some of the first records of the name include: Wihelardus de Trophil who was listed in the History of Northumberland in 1168 and Wilard de Pikeeden who was listed in the same source in 1227. The Yorkshire Poll Tax Rolls of 1379 list Emayn Wylard. William Willarde was listed in Kent in 1602 and Nicholas Willard from Kent married Jane Coumber at Canterbury in 1690. [5]

Early History of the Wellard family

Endless spelling variations are a prevailing characteristic of Norman surnames. Old and Middle English lacked any definite spelling rules, and the introduction of Norman French added an unfamiliar ingredient to the English linguistic stew. French and Latin, the languages of the court, also influenced spellings. Finally, Medieval scribes generally spelled words according to how they sounded, so one person was often referred to by different spellings in different documents. The name has been spelled Willard, Wilard, Viliard, Villiard, Wielard, Willardby, Willardsey, Willardsham, Willardstone and many more.

Outstanding amongst the family at this time was Simon Willard (1605-1676), English settler to Cambridge, Massachusetts in 1634, he was one of the thirteen heads of families in Concord that signed Reverend Peter Bulkeley's 1643 petition to Governor John Endecott in support of Ambrose Martin...
Another 45 words (3 lines of text) are included under the topic Early Wellard Notables in all our PDF Extended History products and printed products wherever possible.

Migration of the Wellard family

To escape the political and religious persecution within England at the time, many English families left for the various British colonies abroad. The voyage was extremely difficult, though, and the cramped, dank ships caused many to arrive in the New World diseased and starving. But for those who made it, the trip was most often worth it. Many of the families who arrived went on to make valuable contributions to the emerging nations of Canada and the United States. An inquiry into the early roots of North American families reveals a number of immigrants bearing the name Wellard or a variant listed above: in addition to Simon, aforementioned, Mary his wife; Jo Willard settled in St. Christopher in 1635; George Willard settled in New England in 1635; Richard Willard in Virginia in 1654.