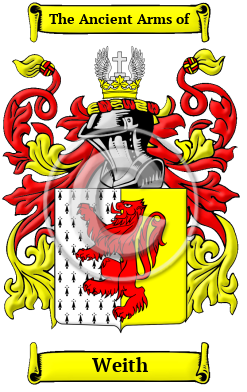 Early Origins of the Weith family

The surname Weith was first found in Somerset where Adam de la Wythye was listed in 1241. A few years later the Hundredorum Rolls of 1279 included Richard atte Widege and Robert Widie in Oxfordshire. John de Wyihye (1296) and Alan atte Wythye (1332) both lived at Withy Farm in Danehill in Sussex and were recorded in the Subsidy Rolls; presumably they were related. [1]

Up in Scotland, the first record there was that of Laurencius filius Wyth, judex de Perth in reign of Alexander II. He reigned there from 1214 until his death in 1249. "Thomas Wyche or Withe was burgess of Perth, rendered homage [to King Edward I of England in] 1296. Henry Wyth, burgess of Dunfermline, appears in 1316 and c. 1340. Bricius Wyche, familiaris regis, had an annuity from the king in 1364. In this record his name is mangled to Dichty, Wacht, Wicht, Wycht, Wighte, Wyght, Wichtis, and Wricht. Malcolm Wyth witnessed a deed of sale in Aberdeen, 1383." [2]

Early History of the Weith family

This web page shows only a small excerpt of our Weith research. Another 139 words (10 lines of text) covering the years 163 and 1632 are included under the topic Early Weith History in all our PDF Extended History products and printed products wherever possible.

More information is included under the topic Early Weith Notables in all our PDF Extended History products and printed products wherever possible.

Weith migration to the United States +

Weith Settlers in United States in the 18th Century

Weith Settlers in United States in the 19th Century