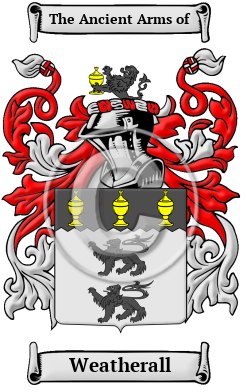 Early Origins of the Weatherall family

The surname Weatherall was first found in Cumberland (now called Cumbria) as Wetheral, a village and civil parish that dates back to c. 1100 when it was first listed as Wetherhala. The place name literally means "nook of land where wether-sheep are kept," from the Old English words "wether" + "halh." [1] One of the first records of the name was found here with Richard de Wederhal who was listed in the Subsidy Rolls of Cumberland in 1332. William Wethereld, Wetherald, Wetherold was listed in Suffolk (1429-1433). [2] Hugh de Wederhale was listed in Cumberland during the reign of Edward I., and Adam de Wederhal, horner was listed during the reign of Edward II., as a Freeman of York. [3]

Early History of the Weatherall family

This web page shows only a small excerpt of our Weatherall research. Another 46 words (3 lines of text) covering the years 1770 and 1846 are included under the topic Early Weatherall History in all our PDF Extended History products and printed products wherever possible.

More information is included under the topic Early Weatherall Notables in all our PDF Extended History products and printed products wherever possible.

In the United States, the name Weatherall is the 15,624th most popular surname with an estimated 2,487 people with that name. [4]

Migration of the Weatherall family to Ireland

Some of the Weatherall family moved to Ireland, but this topic is not covered in this excerpt.
Another 36 words (3 lines of text) about their life in Ireland is included in all our PDF Extended History products and printed products wherever possible.

Weatherall migration to the United States +

Weatherall Settlers in United States in the 19th Century

Weatherall Settlers in United States in the 20th Century

Weatherall Settlers in Canada in the 20th Century

Weatherall Settlers in Australia in the 19th Century