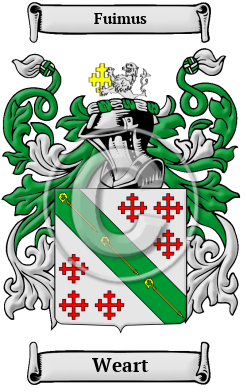 The name Weart is derived from the Old English word "wer" which meant a "weir, dam, fishing-trap" In other words, the family were "dwellers by a dam" or "keepers of the fishing-weir," or fishermen. Today in Britain, Weare and Lower Weare are small villages in Somerset, England, on the River Axe, south of the Mendip Hills. And in the United States, Weare, New Hampshire; and Weare Township, Michigan are listed.

Early Origins of the Weart family

Traditionally, this family derive from an ancient branch of the Giffards of Devon and Somerset and are not related to the Weir of Vere families. Some say, in early times before the 12th century, the Weare-Giffards of Brightly and Halsworthy took the name Weare and eventually dropped the Giffard portion of the name.

"Jacobstow [Ccornwall] in the year 1573, had the honour of giving birth to Diggory Wheare, the author of a life of Camden, a treatise on reading history, and other works. He was appointed by Camden as his first reader in history at Oxford." [2]

Early History of the Weart family

Spelling variations of this family name include: Were, Where, Wear, Wears, Weare and others.

Outstanding amongst the family at this time was Degory Wheare (1573-1647), English professor of history at Oxford University, born at the mansion of Berry Court, Jacobstow, about eight miles south of Stratton in North Cornwall. "He matriculated from Broadgates Hall, Oxford, on 6...
Another 42 words (3 lines of text) are included under the topic Early Weart Notables in all our PDF Extended History products and printed products wherever possible.

Migration of the Weart family to Ireland

Some of the Weart family moved to Ireland, but this topic is not covered in this excerpt.
Another 60 words (4 lines of text) about their life in Ireland is included in all our PDF Extended History products and printed products wherever possible.

Weart Settlers in Canada in the 18th Century