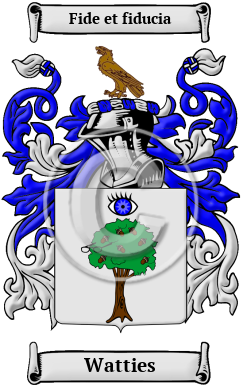 One of the most common classes of Scottish surnames is the patronymic surname, which arose out of the vernacular and religious naming traditions. The vernacular or regional naming tradition is the oldest and most pervasive type of patronymic surname. According to this custom, names were originally composed of vocabulary elements from the local language. Patronymic surnames of this type were usually derived from the personal name of the original bearer's father. The surname Watties is derived from from the personal name Walter, meaning strong warrior.

Early Origins of the Watties family

The surname Watties was first found in Carnegy on the north-east coast of Scotland. "In 1446 there is mention of the seal of Wat of Carnegy. Walter Wat held land in Brechin in 1586, and Alexander Wat was witness to a sasine in 1512. Patrick Wat in Turriff was admitted burgess of Aberdeen in 1609, and John Wat was retoured heir of Adam Wat, writer to the King's Signet, in lands in the parish of Stewartoun, etc., in 1663. " ( Black)

Early History of the Watties family

This web page shows only a small excerpt of our Watties research. Another 147 words (10 lines of text) covering the years 1596, 1796, 1511, 1615 and are included under the topic Early Watties History in all our PDF Extended History products and printed products wherever possible.

Scottish surnames are distinguished by a multitude of spelling variations because, over the centuries, the names were frequently translated into and from Gaelic. Furthermore, the spelling of surnames was rarely consistent because medieval scribes and church officials recorded names as they sounded, rather than adhering to any specific spelling rules. The different versions of a surname, such as the inclusion of the patronymic prefix "Mac", frequently indicated a religious or Clan affiliation or even a division of the family. Moreover, a large number of foreign names were brought into Scotland, accelerating accentuating the alterations to various surnames. The name Watties has also been spelled Watts, Wathes, Wattys, Wath, Watt and others.

More information is included under the topic Early Watties Notables in all our PDF Extended History products and printed products wherever possible.

Migration of the Watties family to Ireland

Some of the Watties family moved to Ireland, but this topic is not covered in this excerpt.
Another 57 words (4 lines of text) about their life in Ireland is included in all our PDF Extended History products and printed products wherever possible.

Migration of the Watties family

Some of the first immigrants to cross the Atlantic and come to North America carried the name Watties, or a variant listed above: Robert Watts who settled in Bona Vista in Newfoundland in 1708; David Watt settled in Barbados in 1680; Captain Watts settled in Boston in 1755; Henry Watts settled in Maine in 1630.