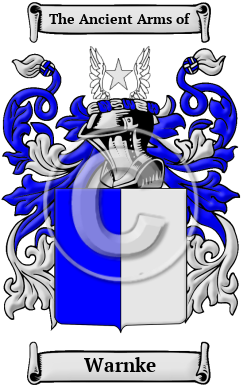 The German surname Warnke emerged in the lands that formed the modern state of Lower Saxony, which is presently bordered by the North Sea, the Hartz mountains and the Elbe and Ems rivers. Lower Saxony was previously a medieval Saxon dukedom. German surnames developed at a time when most of Lower Saxony, and most of the German provinces, were states of the Holy Roman Empire. At first people used only a single name, but as the population grew and people began to travel, they began to find it necessary to take on an additional name to more clearly identify themselves.

Early Origins of the Warnke family

The surname Warnke was first found in Lower Saxony, where the family gained a significant reputation for their contribution to the emerging mediaeval society. Branches of this estimable family held estates near Hanover, at Trebitsch in Silesia, and at Tolitz in Pomerania. The oldest form of the name is Werneke or Werner, but, in northern areas especially around Hamburg, it changed to Warner by around 1300. Chronicles first mention Herman Werneking of Hanover in 1497.

Early History of the Warnke family

Notables of the time included Zacharias Werner (1768-1823), who was a controversial dramatist. Abraham Gottlieb Werner (1750-1817) was a famous mineralogist and is considered to be the founder of geology. He influenced generations of prominent scientists while teaching at the mining...
Another 40 words (3 lines of text) are included under the topic Early Warnke Notables in all our PDF Extended History products and printed products wherever possible.

In the United States, the name Warnke is the 9,879th most popular surname with an estimated 2,487 people with that name. [1]

Migration of the Warnke family

Some of the first settlers of this family name or some of its variants were: Christoff Werner, who emigrated to England or America with his wife and son in 1709; Christopher Werner arrived in New York State in 1710 at the age of 35.

Historic Events for the Warnke family +